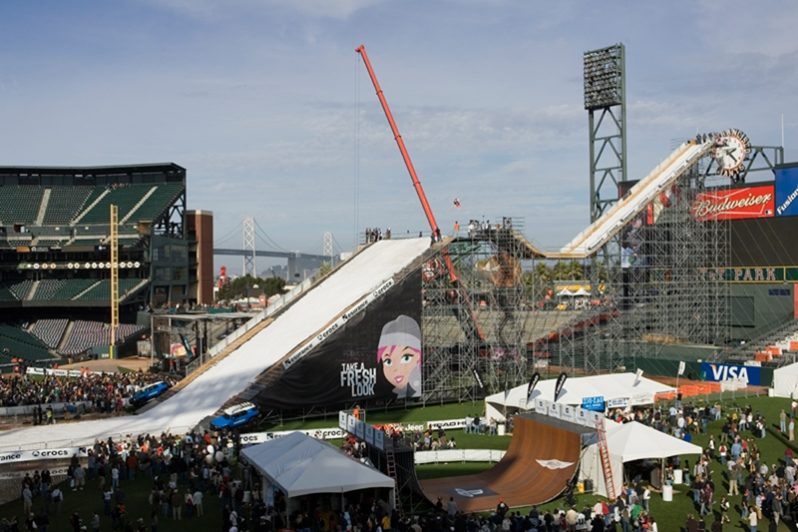 There’s nothing better to gear you up for ski season like a good road trip with your buddies. In my case it was kind of an opposite trip, from Sun Valley to San Francisco for the 2006 Icer Air held inside AT&T Park, home of the Giants. I met up with Gabe Schroder and Cory Smith the snow sport managers for Smith Optics and Jon Atencio from Scott USA. We piled into Jonny A’s kick ass monster van and hit the road a few days early…you know how it’s always nice to take a few extra days in a big city to see the sites and get away from the everyday office life right before the big shit storm of winter hits for these guys. Well anyway, back to the road…Nevada is a long stretch of highway with nothing much to do, so I broke out the gameboy and played some old-school Legend of Zelda. Man that’s still a hell of a game, and a great way to kill a few hours.

Jonny was hell bent on staying in Reno for the night and showing that city who was boss. Clearly he hadn’t looked around much at the locals. He should have known that the city and the tables are clearly the boss, and there is no way to win big in Reno, unless you are a three legged midget hooker traveling with the freak show. Well, to make a long story short our dealer we called Sue from Canada, (her name was actually May and she was from China, but whatever), managed to take everything we had in just under two hours. Not a lot, but enough to leave with a bitter taste in our mouths. That might have been from a lot of things, but my guess was that it was from the breakfast at IHOP the next morning.

We finally arrived in SF and pulled the massive diesel Scott van up in fornt of the W Hotel, our accommodations for the next few days. I of course being a member of a small start-up magazine didn’t have much of a travel budget so I knew I was on the floor for the duration, but who cared. We were in San Francisco at the W and there were plenty of good times ahead of us.

Our plan was to check out the city for a day, and then spend the day at the Park watching some the world’s best skiers and snowboarders hit an amazing big air jump. We decided to hit up the town and headed off to Union Square to check it out. We took a few pictures and went to the Levi’s store, but everyone was too hung-over to shop so we decided to take a trolley to the Fisherman’s Warf.

A quick lunch, which consisted of clam chowder in a bread bowl and an Anchersteam and some site seeing, and we were ready for another site. Gabe decided that we should head of to Haight Street and check out the hippies, so we jumped in a cab and hit the road. Unfortunately for us our cabby had just moved to town and had no idea how to get there. We finally arrived at Haight and Ashberry, home of Jerry and the boys, to a $25 cab ride, which we gladly paid half of since the cabby got us lost ten times. I’ll tell you what, don’t get into a cab in a city if the cabby doesn’t know how to get to your destination…Ok, so we hung out with hippies and went into a few Snow/Skate shops…moving on.

We woke up on Saturday after a few days of partying and realized that the big day had finally arrived. We headed out to AT&T Park pretty early that day thinking that there was going to be a lot to do. We quickly realized that it was going to be a long day. The event featured a 100-foot high jump that descended from the scoreboard at AT&T Park, extending more than 350 feet in length and covered with 200 tons of snow. The main event finally kicked off after J 5 took the main stage, with the backdrop of the Bay Bridge and San Francisco skyline. Last year’s third place winner, TJ Schiller, edged out X-Games gold medalist Jon Olsson for the win when he landed a corked 1080. Olsson threw a switch 900 to claim second and Gabe’s boy Steele Spence came in third with a cork 9. The remainder of the men’s ski division finished in the following order: Cory Vanular, Josh Bibby, John Spriggs, Peter Olenick, Chris Benchetler, Pep Fujas, Sammy Carlson, Simon Dumont, Sean Field and Tim Durtschi.