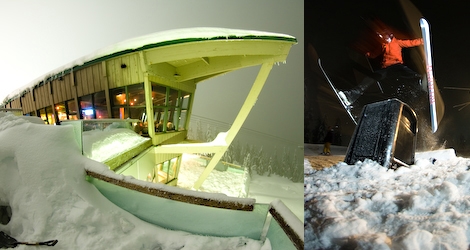 Vancouver?s north shore mountains can be seen from my front window here in Bellingham?pasty white peaks waiting to be skied above the barely visible skyline of our northerly neighbors. Last Friday I had the chance to hop over the border and get to know the north shore by way of night skiing at Grouse Mountain.

Grouse is as much of an attraction for a night-lit terrain park as its views over the city. Unfortunately, the weather didn?t cooperate and as we shot up the mountainside in the loaded tram, the city quickly faded into the snow below.

Up top the slopes crawled with kids up for the bi-monthly Friday night jam session, vying for prizes from Oakley on a couple down boxes and a little kicker. After a few quick laps, we stopped to shoot a trash can bonk with one of the park?s employees. His willingness to huck hand plants (and an obligatory spread eagle) into the rutted out landing was evidence enough of the mentality of the city bred park rider. Solid conditions and a flash firing in his face didn?t even phase this kid.

Once they shut the lifts down the lineup to the bottom got a little crowded?waiting it out over a pitcher or two was the only option. Regrettably, a freak accident involving a pair of goggles resulted in a bit of blood loss in the restaurant. The staff, however, responded quickly and got things cleaned up. A-plus first aid work by the serving team at Altitudes Bistro.

Even though the idea of riding a hard packed park at night seems a little alien to a powder spoiled Baker local like me, Grouse managed to come through with a nice mix of kickers, Canadian beer, and one particular employee who liked to huck his meat for the camera. Nice one eh!