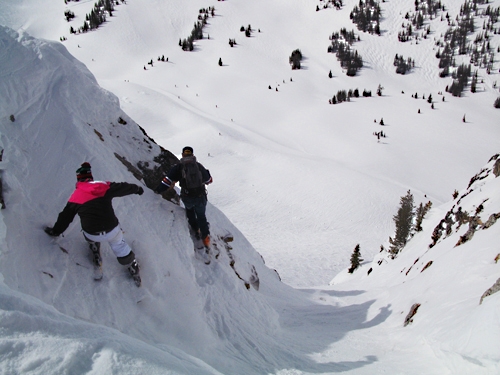 Maybe it was the cube pack of Pilsner. Or maybe the one piece suit. Or it could have been the altitude?Kicking Horse Resort is pretty high up for a coastal dweller like me. But I?ll just admit it: this weekend I went snowlerblading? and it was fun.

I was in Golden, BC, for gaper days, the end of season party featuring live music, a dummy downhill, a couple strategically located sun pits (don?t fall in the holes) and plenty of neon. Unfortunately, the weather didn?t exactly cooperate, with intermittent snow flurries putting a bit of damper on the sun pits? allure, but at least the snow was decent and that made for good skiing. Or I guess I should say good snowlerblading.

I?m not sure exactly what started it. Certainly the lack of significant snowfall over the past week or two made it a little less appealing to ski bigger lines. But that wasn?t totally it, because after a few turns off the top the snow wasn?t bad. I think we were inspired by the guys playing hockey on short skis, they definitely made it look like fun. Halsey?s mustache helped. Regardless, dropping into tunnel vision, a rocky chute right off the peak, was one of the scariest things I did all year. Schmear turns take on a whole new meaning on 105?s: you can hip check through rocky zones like a miniature Scott Schmidt, snaking through the skinniest of spots with limited edge hold.

Carving out the bottom, low speeds felt fast and keeping my hands in front became a bit of a struggle. But it was a good way to celebrate the impending end of the season at Kicking Horse. One day a year might be plenty for snowlerblading but that one day is totally worth it: new things can be scary and scary can be fun. Now go grab a cube of Pilsner and throw on your flannel ?cause gaper days are here and the snow never looked better for a couple schmear turns on a pair of ski blades?no matter what your friends might say.