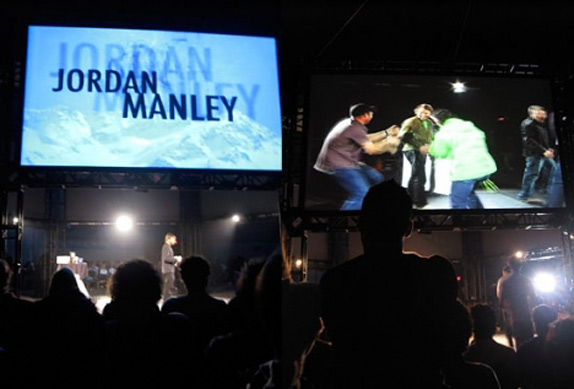 As the crowd settled in, snow culture seemed fairly recession-proof with a good half-dozen luckless would-be attendees wandering about with cardboard “Got Tickets?” signs. Not bad for an event that co-founder Jack Turner would later claim one large shred mag laughed at originally. The State of the Art show in the foyer, featuring everything from handcarved skateboards to snowboard retrospectives, again proved a popular attraction for the well-lubricated and well-stoked crowd.
As the lights dimmed and local legend Mike Douglas took the stage in full drag, the crowd cheered to the introductions of five of the actions sports worlds rising stars: Ian Ruhter, Christian Pondella, Jordan Manley, Scott Pommier, and Daniel Blom.

Traveling from as close as a few blocks and as far as Sweden, all of the photogs submitted a seven-minute slide show representing their best work edited to a soundtrack of their choice. With image diversity ranging from the dramatic aerial antics of the Red Bull crew captured by Pondella, to the alpenglow urban jibbing by Blom, to Manley’s near flawless command and stunning results, to Pommier’s intimate documentation of LA skaters and biker culture redux (“I felt like I was re-witnessing ‘The Birth of The Cool’,” said one judge later), to Ian Ruhter’s equally haunting and inspiring images of physically challenged subjects dropping into cement skate bowls in wheelchairs, leaping dirt jumps in modified motor chairs, riding motorcycles post leg amputation all in incredibly framed black and whites. And all we (myself being a judge as well) had to do, was to pick a winner, something Dano Pendygrasse mentioned earlier was akin to “the hardest job in the world”. While I can say from personal experience that shoveling hot asphalt in 100 degree heat is hard work and judging photos is fun, I get what he meant.

In the end, there was solid consensus for Mr. Manley’s work. With a complete range of action, landscapes, portraits, and an impressive command of all aspects of lighting, focal points, etc, Jordan hit all the notes and had the most total package. But if this were a foot-race everyone hit the tape within a second of each other.
And additional congratulations is due to Ian Ruhter, from having had the personal opportunity to travel with Ian when he was a teenage snowboarder and accomplished punk, seeing him achieve this level of creative development, and the artistic courage to bite off a big and real subject, I am more than impressed. This collection of athletes and individuals overcoming their physical challenges, captured in a compelling and non-condescending manner deserves to be a book, a documentary and more. While I do think that Jordan deserved to win the event. Ian should be very, very proud along with all of the competitors.

Thanks to Lisa Richardson, Lili at Watermark, Eric Berger, Jack Turner, Whistler, and Telus for continuing to bring this worthwhile endeavor to life.