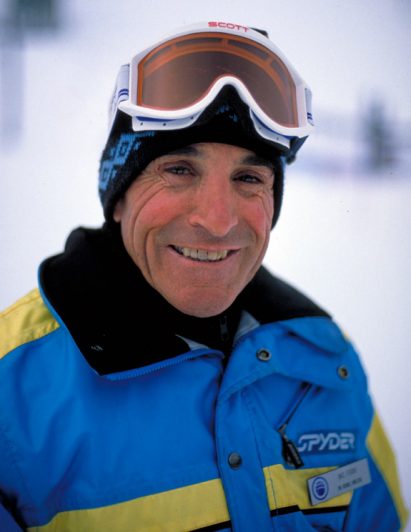 Yosemite, CA – Nic Fiore arrived in Yosemite Valley on a snowy night in 1947 to work as a ski instructor at Yosemite’s Badger Pass. He slogged through three feet of snow to his dormitory, exhausted from the transcontinental train trip from his native Montreal and the following morning met ski school director, Luggi Foeger. Until that moment Fiore hadn’t seen the valley’s sheer walls. The 27-year-old ski instructor turned to his new director and, while looking up, exclaimed, “Luggi, this is fantastic, but where do the beginners ski!?”

In the 57 years following his arrival in Yosemite National Park, Nic Fiore answered that question like no other American ski instructor, teaching some 137,500 people how to ski at Badger Pass. He retired in 2004, after teaching skiing for more than 60 years. His career began in 1940 as an Army Ski Instructor for the Royal Canadian Armed Forces. Following World War II he became certified by the Canadian Ski Instructor’s Alliance and taught skiing in Canada’s Laurentian mountains, before moving to Yosemite.

Fiore, who died Tuesday in Fresno at age 89, is believed to have taught more people to ski than any other ski instructor in North America. Thousands of baby boomers were introduced to skiing at dry land ski schools conducted by him during the 1950s and ’60s, and he became a Yosemite institution not only in winter. He also managed the Glacier Point Hotel, Big Trees Lodge, Hotel Wawona and Yosemite Lodge, and in 1966, began directing Yosemite High Sierra Camps, often walking from five to 25 miles a day between camps.

In 1965, Nic Fiore authored the ski technique guide, “So You Want to Ski” and, in 1967, he was selected by the French government to represent the United States at its prestigious French National Ski Instructor’s academy in Chamonix. Fiore subsequently coordinated similar exchanges in the U.S. to improve American ski instruction techniques.

For many years, Nic Fiore served as Executive Director of the Professional Ski Instructors of America/Western Division and became the only person to receive both the Northern California and Nevada Ski Media Association and the Southern California Association of Ski Writers awards for outstanding contributions to the sport of skiing. Fiore is the only ski instructor ever to have been inducted into the California Tourism Hall of Fame and the California Outdoor Hall of Fame. He was also nominated three times to the U.S. National Ski and Snowboard Hall of Fame.

The venerable Yosemite Winter Club, one of the oldest ski clubs in the western United States named its highest award in his honor. The club’s Nic Fiore Award is presented annually to “an individual who demonstrates enthusiasm, commitment and a love of winter sports” as did Fiore. Though, the honor he cherished most were the three generations of skiers who would crowd around him at ski shows in Los Angeles and San Francisco, seeking a moment with their instructor, the energetic and joyful Nic Fiore.

Badger Pass is one of America’s smallest ski area, but is widely recognized for its excellence as a place to learn to ski and snowboardboard, credited to Nic Fiore’s legacy as its longtime director of skiing. While some contributions to skisport happen in an instant, his occurred over 60 years.

Nic Fiore never earned more than a ski instructor’s wage, yet said his reward was in passing the joy of skiing to three generations of skiers.

He is survived by two daughters, eight grandchildren and five brothers and sisters. A memorial service in Nic Fiore’s honor is planned to occur at Yosemite’s Badger Pass ski area in autumn. His family has asked that contributions be made in his memory to The Yosemite Fund and the Air Warrior Courage Foundation.