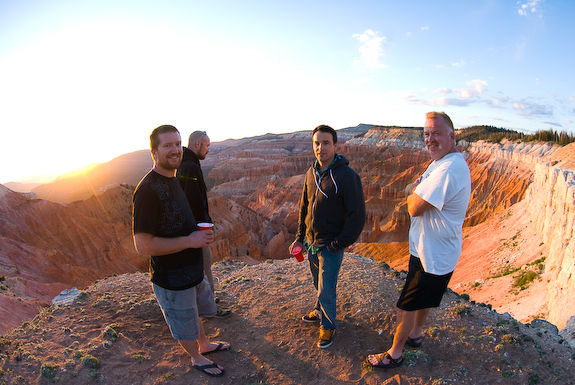 Brian Head, UT (July 22, 2009) — Three days can go by pretty fast. Half a work week; nine solid meals; a long weekend by the lake. Well, let’s just say that Ski Utah’s Camp Wasatch wasn’t your typical three days of travel. In fact, I’d be hard pressed to say I’ve ever experienced three days so packed with diverse activities in my short time on this planet. So, I give you the Camp Wasatch Man Camp Roundup Part 1 of 2—the first half of three days of good living, from high style to low brow.

Upon arrival at the Ski Utah office in SLC it was apparent that this would be man camp: the only female scheduled to take part had cancelled, leading counselor Jessica Kunzer to lead a group of nine men from various ski media outlets including myself, Grant Gunderson, and Matt Wibby from The Ski Journal. Loading into two vans for the four-hour drive south to Brian Head Resort, our van had the good fortune to make a stop in Beaver, UT, population “seven or eight hundred”, where we sampled the array of beers on tap: Budweiser, or Budweiser.

After a gourmet dinner and good night’s rest in private suites, campers had two options for mountain bike shuttles in the morning: Bunker Creek, a 3,000 foot descent that has been voted in the top five trail rides in the country, or a 5,000 vertical foot downhill ride on Dark Hollow. Both descending from the resort’s peak at over 11,000 feet, both promising spectacular vistas from red rock ridges to strips of grey sand and green pastures into the desert below, both dropping from the dry winds of the alpine through lush deciduous forests to the hoodoos and steaming streambeds of the valley floor. Brian Head’s General Manager, the jovial Henry Hornberger, led Bunker Creek, while his son took five of us down Dark Hollow.

Jagged, rock-strewn switchbacks led to rolling meadows, a steep descent off the ridge and into the forests, before taking us through lush greens and contrasting whites of spruce and aspen, before letting out onto a lengthy gravel road strewn with multiple kickers along the edges and massive red-rock towers overhead. There was even a stop for an impromptu kicker session in one of the young Hornberger’s secret stashes. Epic, indeed.

A big lunch of smoked pork loin, chicken, and vegetables under our belts, it would be hard to top the morning’s ride, but canyoneering is a whole new world.

Picture this: a jagged ridgeline sits above the dry, cacti-and-sage-brush meadow you are now traveling through. Your guide, a large, grey-mustached man with a white helmet on, who also happens to be the founder of the American Canyoneering Association, tells you it’s time to climb straight up a scree-slope to access and invisible canyon on the left. Now act surprised. Certainly, none of us expected the vigorous workout after a long morning of mountain biking. But the way down would be well worth the climb.

The initial rappel was a hundred-footer down a waterfall, into a slot canyon with no way out but to rope up to a tree and continue through the choke. Gripping, to say the least. One by one, campers plunged over the edge, disappearing into the bowled-out slot canyon below. It took some coaching to make that first step: “just lean back, you’ll be good”. A tough sell on someone with a bit of a fear of heights, but rappelling is actually pretty simple once you coax yourself over the edge, and soon we were all splashing down towards the subsequent 30-40 footers and back out into the meadow in good spirits.

Sunset dinner followed at Cedar Breaks National Monument, a vast canyon boasting strips of red and white walls adorned with thousands of tall, knob-topped hoodoos. Another taste of the diversity of this land.

From alpine scree to lush forests, scorching deserts and humid gorges, picturesque vistas and tight, sheer-walled canyons, southern Utah is a land of contrasts. And the subsequent days would be no different…