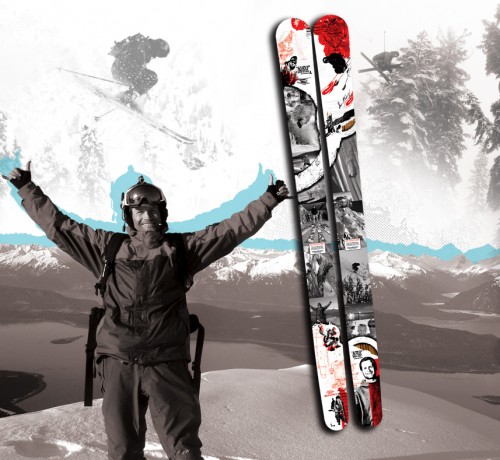 “On March 26, 2009, ski legend Shane McConkey died in a ski BASE jumping accident in the Italian Dolomites. In countless ways, McConkey defined skiing as a lifestyle and by pushing the boundaries of the sport.

Shane was a member of the K2 Skis team and was a creative thinker who challenged conventional wisdom in ski design…To celebrate Shane’s life, K2 Skis will release a limited edition Shane McConkey Ski, built on the Pontoon chassis, in winter 2009. Graphically inspired by Shane’s personality, ability, and many contributions to our sport, the ski will be available at participating authorized K2 Dealers and K2skis.com beginning in October. Approximately 500 pair of the unique, individually numbered, commemorative skis will be produced. All net proceeds generated by sales of the Shane McConkey Tribute ski, suggested retail $699, will be donated to Shane’s family.”

A worthy cause indeed.