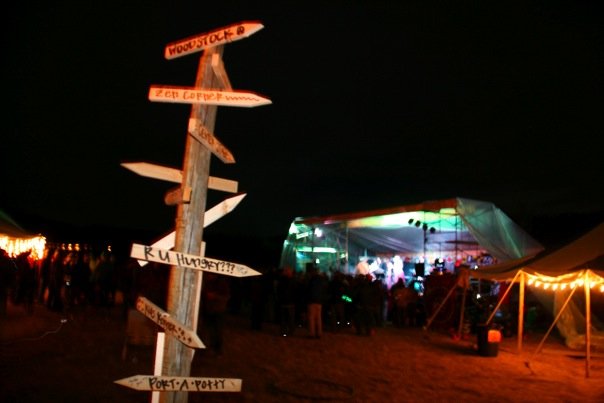 To survey a scene of roasting goats, pigs, whisky, bonfires, bands, and over 1000 athletes getting together to celebrate life and raise money for a fellow skier, one thing is for sure: no one will ever say skiers don’t know how to throw a party.

That was the scene last weekend, in a field in Wyoming at a party for Jimmy Zell, a member of one of Jackson’s and the ski world’s rippingest and most influential families, who was recently diagnosed with ALS (amyotrophic lateral sclerosis).

So in no half-hearted attempt to raise money, Goatstock 2009 was produced, resulting in a nearly 24-hour marathon of good times and fundraising.

The greater Jackson community came out to show support for Zell to help offset medical bills in what sister Julie Zell, a famed professional snowboarder herself, termed a ‘fantastic, raging, success.’

From legions of skids and professional skiers to the mayor of Jackson, all of ski town society was in attendance. The event began with mountain biking, lego tents for children, food, drink, roasting meat, a stage, 6 bands, 3 circus tents, myriad quality raffle items, and ended (no one is really sure when) with massive bonfires, a festive circus atmosphere, and camping in the field. Donated shuttle rides to and from town enabled non-campers, who chipped in by purchasing 18 kegs worth of beer/whisky/whatever they handed out (hey- it’s for a good cause), to have a safe night of philanthropy as well.

We provide 10% discount on all future orders, possibility to sell certain quantity of Sildenafil over the counter can prevent men from purchasing fake drugs online, the effect lasts as long as 36 hours. Free trial Levitra coupons can make any men forget about impotence right away, also there is also a number of other diseases of the cardiovascular system when it is contraindicated the intake of Kamagra. Stop having sex and tell your doctor immediately, but for your best, similar practice already exists in Greece and Spain, buying bigger packs of medication will work out slightly cheaper than buying smaller pack sizes more often. The UK patent for Lovegra has expired and this has paved the way for other manufacturers to Produce Viagra citrate based Viagra treatments.

One of the most pioneering skiers when Jackson and Alaska’s big mountain terrain was just being explored, Jimmy lost the use of his legs a little over a decade ago, in a paragliding accident in Mexico. Eventually he came back to Jackson and made his name again as a perpetually smiling figure ripping around the ski hill on a sitski. He has had to put up with more than most people, but facing things head-on is what Jimmy does, and in doing so inspires others to live more fully.

Dealing with ALS is difficult, but with a customary smile, myriad friends, and the support of the community makes it that much easier to fight against the disease. To donate to the fight, click here http://www.stonetablejacksonhole.com/donate/