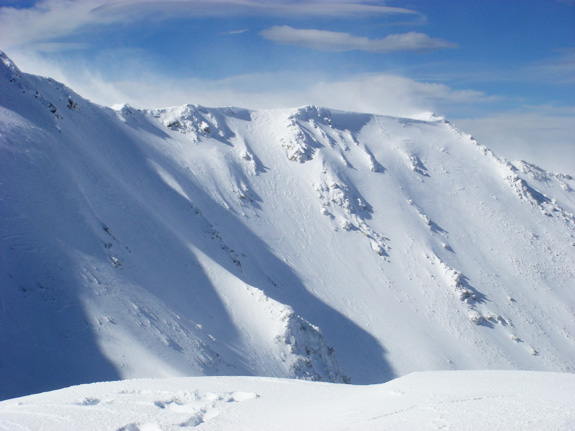 Come each winter in the southern cone, Las Lenas , Argentina is the first and foremost gathering spot for the freeride scene from around the world. Having skied that area and its backcountry in blower pow as well as less rewarding conditions, it rightly takes number one. I love it. Everybody loves it. And that is why sometimes, it is good to get away.

This year, I arrived just not in the mood to deal with Lenas and its status, as my Argentine friend and ex-Whistler resident Huere Darquier refers to it, as a gringo colony.

It was time to flee. I decided against Chile (costs more than Argentina), and went south to Patagonia, where it rains a lot in the spring and my first day was spent in a deluge. And there I was. And there I stayed, because I wasn’t about to spend 16 hours in a bus, again-although I was sorely tempted.

The reward for this leap of faith was one day of soaking rain by the lake, followed by multiple blower powder days at Catedral Alta Patagonia and La Hoya (which has, by the way, super sweet terrain, really good snow quality, and is quite cheap). But the best part of this was the total mellow.

The ‘multiple’ in powder days came from the fact no one else was out there. My friend and I were just about the only ones hiking and touring off the resorts. There was no racing for lines, no anxiety, no using my albuteral to skin and boot faster than you…just a lot of stoke.

As fun as the our ski scene is, it (and Lenas) will always be there. Sometimes, just to go and ski, just for the sake of skiing, is necesary. You never know what you will get-a blower pow ridge at La Hoya, with only your tracks all day, or maybe the most interesting thing you have dropped into in a while (and in the Chapelco backcountry? who knew!). And some damn good Patagonian ice cream afterwards.