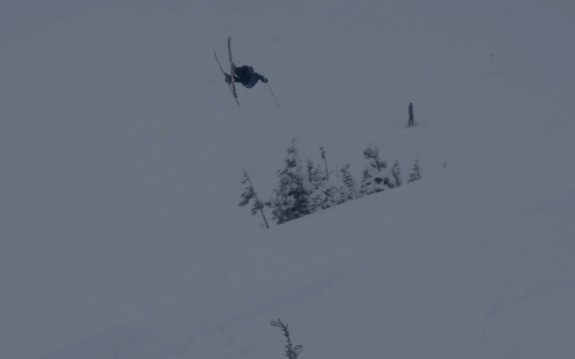 This video came to my attention today and it depicts a skier setting off a large slide in Haines AK while his helmet cam rolled. He was buried over four minutes before a successful rescue. 2 minutes to 6 minutes are simply being under–if you ever wondered how scary it was to go down, this might tell you.

This, from the Vimeo description of the scenario:

It was “the first legit day after that main snow storm cycle that we arrived to we still went out snowmobiling one more time while another part of our group went up in the bird. Actually two groups went up in the bird, and the first group did all the normal day-after-storm-cycle snow pit and snow quality tests.

The first group decided that while the dangers remained high, that it was good to go. They all made some of the sickest pow turns in their lives I was told. The next group then – a couple hundred meters or so over – set up for their descent.

The guy in the video was the first one to drop from their group and while not a guide (he was going tail-gunner style), had a lot of Utah and AK backcountry experience…as he drops in you can also see the sluff to the skier’s right immediately start building….and that’s actually the chute that was the intended route down. For whatever reason – well pure, unadulterated powder will do it to you – he didn’t go make some strong “skier cuts” into the upper pack to do one final snow check.

Instead he just sent it. And it didnt’ take more than a few turns out on this big shoulder above this cliff band to break loose.

This was a decent sized avalanche. 1,500 feet the dude fell in a little over 20 seconds. The crown was about 1 – 1.5m. The chute that he got sucked through to the skier’s right was flanked on either side by cliff bands that were about 30m tall. He luckily didn’t break any bones and obviously didn’t hit anything on the run out.

He was only buried for 4 and a half minutes which is incredibly short. In that time, though, you can hear his breathing already accelerate. The ruffling noise back and forth is his chest rising and falling and the noise that his jacket makes. The intermittent whimpering noise you hear is him trying to swallow and get some air. Still sends chills up the back of my neck. Oh and they located him so fast because his right glove came off just before he came completley to rest and there was an excellent visual of course.

The digging out is utterly amazing. I don’t think that you could’ve paid a Hollywood crew to stage something better. The fact that he could’ve been facing any 360 direction and yet he’s looking right up into the sun-filled blue sky with that first full scoop away of the shovel is borderline spiritual.”

Stay safe out there.