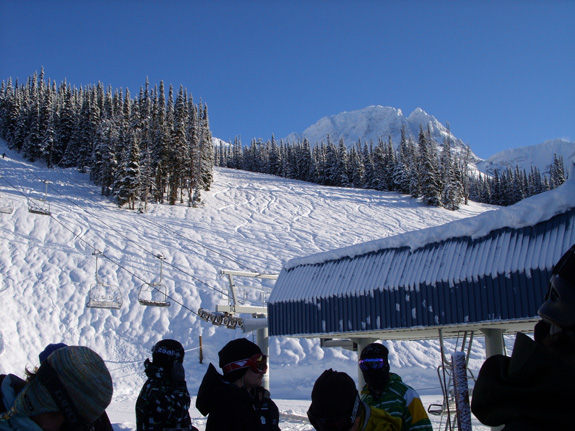 Whistler, BC (November 26, 2009) — With press releases piling up about the record November snowfalls at Whistler-Blackcomb—having already received half the yearly average—the Blackcomb side of the mountain opened today to moderate crowds and stoked locals and vacationers alike. Unexpected blue skies came on the heels of last night’s driving rain, and the sound of avalanche control explosives floated through the lineup at the jersey cream chair at 9am.

After a fifteen minute wait, we were treated to knee deep pow—the opening of seventh heaven followed an hour later and the snow was deeper and lighter up high. A few quick tree laps and turns in the still somewhat bony confines of Sudan’s (admittedly, we were a little late on that one) lead to the Peak to Peak and the less crowded slopes of Whistler, where a conveniently groomed cat track made for an easy hike up to Harmony and day-ender turns down untracked blower right to the village.

Indeed, it felt like mid-winter in November—a good omen for the upcoming Olympic year. With avo control underway at the Harmony Express, which is set to open for the weekend, it’s only going to get better.