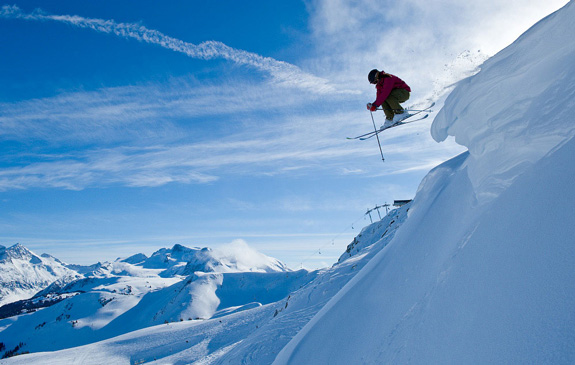 Ah, the American Dream: Working hard to make a living doing what you love. Isn’t that what it’s all about? Big mountain skier Leah Evans’ young career may epitomize the American dream, if only you ignore one small fact: she’s Canadian.

In that case, call it the Canadian Dream, or perhaps just the Dream. Regardless, Leah is living it. The 21-year-old hails from Rossland, BC and her skiing roots go back to competing as a youngster with the Red Mountain Racers. Active in the Canadian Big Mountain Circuit and a top competitor in several International Free Skiers Association events, she has a a few notable results already: A run at the 2009 Canadian Open Championships earned her a “Sick Bird” nomination, and her fluid skiing during the 2009 US Freeskiing Nationals at Snowbird, Utah landed her in third place.

But beyond competitive pursuits, Leah has taken her passion a step further with Girls Do Ski, an event-based company which focuses on woman’s free-ski development through intensive training camps. Geared for intermediate and expert skiers ages 13-50, the typical Girls Day Out consists of a two-day session with professional coaches and trainers, motivational workshops, new demo equipment, and plenty of big-mountain enthusiasts looking to hone their skills.

“They advocate good life perspectives through ski lessons and have given role models in the community a chance to be recognized and showcase their skills. As more women have participated and become involved the events have really gained momentum and grown.”

At age 19, Leah organized the first Girls Day Out. Her inspiration came from days on the Canadian Free-Skiing tour, where she recognized a lack of female specific programs and media attention.

“Go into a ski comp and generally there are less girls and usually there’s a huge gender comparison attached. People may say ‘that was a good run for a girl’… It’s not necessarily that I’m so avid about pointing out this inequality, more that I’m trying to create a solution and a force to get girls out there skiing,” Leah says.

The company is already growing: plans to expand outside of the Kootenays are in the works, as well as the introduction of a co-ed camp.

“Through my competitive endeavors I’ve found people that were interested, and especially a lot of my guy friends asked, ‘Why don’t you have this for guys as well?’ So we’re going to go for it.”

“Standing at the top of stuff that scares you, and just being able to work it out through your mind is huge. We’re trying to work through those issues, like ‘why can’t I do this rodeo 7 or things like that.”

You would think that the pursuit of any dream would require an immense amount of planning and coordination. So what forethought did it take to fuse Leah’s skiing with her company and education? Surprisingly, not much.

“I have combined something I’m really passionate about and have been able to work it into my lifestyle, but I never actually planned it all out. I kept meeting people that influenced my decisions and it just evolved every year.”

One thing Leah does plan on is more of the same – skiing, school, and supervising her business.

“I’m just going to keep going with what I’ve got right now. I think life is about balance and just finding out where you’re happy, and for me it all seems to overlap.”

Living the dream, indeed. For more information on Girls Do Ski check out www.girlsdoski.com.