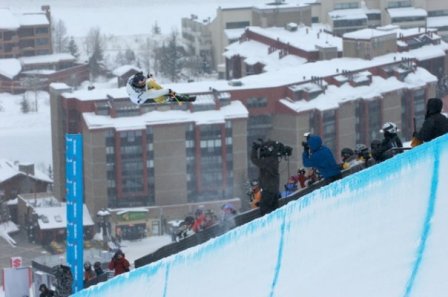 Growing up in Bellingham, Washington, half-pipe skier Angeli VanLaanen, practiced skiing backcountry lines her entire childhood. When park skiing finally hit Mt. Baker, VanLaanen transitioned into the pipe. Since moving from Washington to Colorado, she has competed in the X Games, won first place in the 2009 Park City World Cup Superpipe, and second place in 2009 at the World Skiing Invitational in Whistler. In addition to her podiums and star roles in films, such as Oakley’s “Uniquely” and Atomic’s “44 Days”, I always knew Angeli as the girl who went huge out of the half-pipe. We sat down in Boulder after an athlete meeting in Winterpark with Atomic to talk about the Olympics, her plans, and a recent move to Salt Lake City.

When the Austrian guys from Atomic asked Angeli about competing in pipe she modestly responded with some basic information about what exactly it is that she does. I desperately wanted to interrupt and tell them that she was known for going huge out of the pipe, but then the question finally came… “How far out of the pipe have you gotten?” She had to tell them now; VanLaanen has gone as far as 20 feet out.

We were at the Atomic Riders Development Summit in Winterpark, Colorado. I got to spend the weekend with Angeli, figuring out the details of her genuine personality. Over crepes in Boulder, Angeli and I talked about skiing.

What are your plans for the coming year?

I don’t plan too far in advance since our sport is so dependent on elements outside of our control, but I do have ambitions to keep competing in pipe and getting progressive backcountry shots and footage.

I heard that women’s pipe is set for the Sochi Olympics.

This is a dream come true for the athletes and sport of freeskiing. The Olympics will bring pipe skiing to the mainstream public and in turn create tremendous opportunities for everyone in our industry. I have every intention for working my butt off for Russia 2014.

What does working your butt off involve?

Being from Baker I am entirely an organic skier; I have never had training in a formal environment until recently. I plan to continue with water ramping, working out with a trainer, and hitting the trampoline. Four years is a long ways away, so mentally I will just take one step at a time.

It sounds like Salt Lake has a lot of the resources you need?

I moved to Salt Lake for the season and I love being so close to a range of mountains…Alta for powder and Park City for pipe. The Olympic training center in Park City is great for the trampoline and water ramps in the summer, which I took full advantage of this year. Also, being surrounded by motivated and fun ski buddies has been very positive for my skiing.