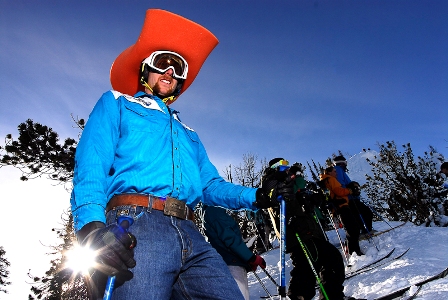 Seriously, why is it that when I find out about events that are happening in Canada I look at my life and feel like such a stiff? Kicking Horse’s Wrangle the Chute event, which just took place February 6 and 7, 2010, provides all the proof I need for my theory; Canadians just know how to get it done. Breathing some life into an otherwise serious competition scene, Wrangle the Chute exhibited riders’ talents from straightlines to switch skiing the entire venue. Check out the press release, results, and photos here.

So, you might be able to annihilate the big mountain lines, but what about boosting booters and riding mechanical bulls? These three categories, all included in the Wrangle the Chute competition this past weekend, make Kicking Horse’s event unique to the freeskiing comp world. The mechanical bull brought Wrangler in as the main sponsor, supplying money for a skiing and photography contest. Wrangler, a mechanical bull, skiing, beer, B.C…need we say more?

February 10th 2010, Golden, BC… On February 6th and 7th, 2010, top skiers and snowboarders travelled from far corners of Canada and the U.S.A., to Kicking Horse Mountain Resort for the ultimate showdown of big mountain riding in the second annual Wrangle the Chute. The famously treacherous terrain was conquered by both male and female athletes, and proved little challenge for the pros who hucked massive cliffs, maneuvered through tight terrain, and stomped down some big tricks at the finish line jump; although E.J. Hector (pro. Ejector), Kicking Horse’s newly named bronc, gave them a run for their money.

“Wrangle the Chute was even bigger and better this year,” says Steve Paccagnan, President and General Manager of Kicking Horse Mountain Resort. “We saw cliff drops, amazing aerials, and a competitor straight-line the entire chute; we even saw one athlete ski top to bottom and hit the jump, all the time riding switch! It was a great feeling to be part of such a big crowd, listening to the reactions and excitement this competition brings to our resort. The Heaven’s Door Yurt Café proved to be the grandstand for this event; giving the crowd the best views, great food and exceptional entertainment!”

Athletes competed under bluebird skies on Saturday; though Mother Nature changed it up with poor visibility on Sunday. In true professional style, the competitors adapted to the conditions and threw down some impressive runs on both days.

Alex Wall, 21, a Kootenay local from Nelson, BC, sponsored by Faction Skis and Tribute Boardshop, took home the $1,000 cash prize and the glory of being 2010’s Wrangle the Chute Men’s Champ! Second place went to Stu Bilodeau, 24, of Invermere, sponsored by K2, Smith, Syndicate and Fresh, while Austin Ross, 21, of Pemberton, and member of the Rossi Ski Team, took home the third.

In the women’s division, competition was tight! Izzy Lynch came out the leader after Saturday’s run, though was swept by Leah Evans on Sunday afternoon. Evans, 22, a Revelstoke local and member of the Rossi Ski Team, is the founder of a women’s ski program known as “Girls Day Out”. She is the 2010 Wrangle the Chute Women’s Champ, followed closely in second by Izzy Lynch, 24, Zoya Lynch, 18, in third, and Golden local Brenna Donaldson, 20, in fourth.

New to the Wrangler weekend, Kicking Horse Mountain Resort hosted the first annual Wrangle the ‘Shoot’. The photo competition presented a unique twist for the event, and echoed the creativity and originality of Wrangle the Chute; being the first and only competition to incorporate on-course photographers, same-day turn around, and a nighttime photography show. Sixty-five amazing photos were on display and more than 100 people came out to place their votes based on Best Action, Best Landscape, Best Lifestyle, People’s Choice and Best Overall Photographer.