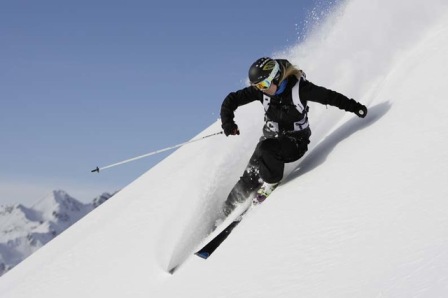 Born and raised in Norway, Karine Falk-Pederson spent her college years racing for the Denver Ski Team. Last season she initiated her big-mountain competition career, placing fifth place overall by the end of the season. Filming with Warren Miller and competing keeps her traveling all winter, only spending a few weeks back in Norway each season. Luckily, she just started using a helmet cam, so everyone at home can live vicariously through her videos. Read on to hear about where she has been, where she wants to go, and what she always takes with her when traveling.

How has your competition season been so far?

Well, it’s been a weird start this year. Physically and mentally I feel strong, motivated, and stoked that I’m competing again. I had a great time in Revelstoke, made it to finals, had a solid run, but lost a ski at the very bottom. Last weekend I went to Telluride for the qualifier, was sitting in fourth after day one, figured I had nothing to lose, wanted to push myself, and as I thought I was finishing up a solid run my ski popped off again at the very bottom even though I switched to race bindings and cranked them up to fourteen. I’ve been a bit unlucky to start off the season, but I just have to be patient, stay focused, and remember that thankfully I haven’t injured myself when crashing.

Favorite place you have traveled?

That’s practically impossible to answer. I think that all my best memories from traveling are more about who I travel with and the mindset we all share. The best adventures always come from being impulsive, going with the flow, and then you end up in the most amazing places you could imagine. Also, especially with winters being so unpredictable, not having much planned and going where the snow is at, is often the best way to go.

Any big plans to finish the season off?

Yes. First week of April I’m headed up to Lofoten, Norway, for a photo shoot. We’re headed to Kablevåg Hotel where a friend of mine just started working and there are tons of great mountains for touring. Also, at this time up North the sun doesn’t go down until really late, so we will be able to be outside for a long time and have great light for shooting. I also hope to get into the Freeride World Tour Qualifier in Røldal, Norway and compete, but I’ll probably go either way to cheer and watch.

I’m so excited and lucky to be shooting with Warren Miller again. They’re such an awesome crew, tons of fun, and I know the experience is going to be a blast.

What do you do other than skiing to stay in shape while on the road?

I actually went to Bali for a month last summer to get my Ashtanga Yoga Teacher Certificate. It was an awesome experience and I learned a lot about body and mind. I try to do as much yoga as I can; staying flexible is such an important factor for skiing. As soon as I’m not stretching enough, my muscles tighten so much that my back and knees start hurting a lot. I think it’s a very good way to avoid injuries.

How much time have you spent in Norway this season?

Not a lot actually. I got about two to three weeks in December; we spent Christmas in Hemsedal and got tons of snow. It was probably the best skiing I’ve ever had before January. Then I had one week between being back from Canada before heading to the U.S, so I basically just had enough time to see the family and re-pack my bags.

You just got a new helmet cam…will you primarily be documenting your competition runs?

Man, I love the helmet cam. It’s a GoPro Hero, HD, awesome resolution and so fun to play with. I will definitely be documenting competition runs, but also other adventures. I just think it’s a lot of fun to learn media stuff, photos, video, editing, audio, etc… I have a lot to learn though.

What are your goals in competing?

Go bigger, decrease hesitations, ski fluidly and controlled, and have fun all the time. I have always been a very competitive person, so I’d be lying if I didn’t say I really want to win.

Are you just doing the North American Freeskiing Tour?

For the most part yes, but I’m also thinking of doing a few comps in Norway in April; Hopefully the FWTQ that I mentioned in Røldal. I wish there were time to do more comps, but winter goes by too fast.

Favorite person to ski with?

Didrik, my older brother is in the U.S doing the tour with me, and it’s so much fun. He’s an awesome skier and I become so much better when I’m following him around.

What is your one essential item for traveling?

I think I’d have to say my digital camera. I bought a Canon G11 this fall and I’m in love.

Any place you haven’t been for skiing that you want to go to?

I really want to go to Japan. The skiing seems good and I would love to experience the culture there.