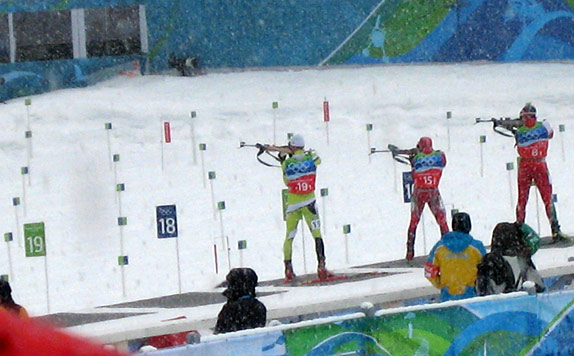 Whistler Olympic Park — so twelve years after standing in the rain in Nagano watching snowboarding’s inagural event, I find myself back in the inclemency watching the men’s 4 x 7.5 KM biatlon relay, the final event for biathlon of these games. With a bit of research and native intuition I had decided that I wanted to dive into the deepest weirdnesses the Games had to offer. I figured I’d see marquee events ad infinitum on CTV (and nominally on NBC), but it was the truly hardcore Scando-Germanic-Slavic fans in facepaint and cowbells the size of basketballs rooting for things no one in North America has a clue about I wanted to check out. Nordic combined looked good; a cross-country race and jumping off the big hill on the same day; 4-man bobsled, where sprinters from the Carribean are pitted against brakemen and drivers from Bavaria, and team nordic jumping all fit this bill. But there something compelling about biathlon…

Any sport which culminates with athletes collapsing face down in a pool of their own slobber and gun on their back is truly, well, sporting.

The action began early on the shuttle bus to the venue when Team Ruski boarded in full regalia. With fellow correspondent Jessie Lu and I wrapped entirely in Gore Tex and fleece, Team Ruski opted for a more casual look: Russian Starter jackets; white sweat pants; and tennis shoes. The handle of vodka produced by the accredited Russian journalist was also a nice touch. Upon arrival, a quick security check and mile long uphill slog past an impromtu shrine of snowmen, and we arrived to a sea of Norwegian, Slovakian, German and the ubiquitous Russian flags waving proudly in the hammering wet snow. A smattering of maple leaves and Old Glories dotted the landscape as well, as the mass start commenced. Although the US and CDN teams began well, a serious of poor shooting performances knocked down their otherwise solid performances.

It was quickly appearent this was going to be a race between Russia, Austria, and Norway. The other intriguing race was among the horned, painted and clanging Russian and Norwegian fans sprinting from the shooting gallery/finish to the first turns and back screaming at their crew as loudly as possible. With US anchorman Jeremy Teela coming into the finish we made like Ruskis and began yelling with force. A friend of mine went to high school with him, and for encouragement we yelled “Go Cougars!” It was enough to propell Team USA to a 13th place finish.

The biatlon did not disappoint. Crazed Euro fans, incredible skiing and marksmanship. And we even had hot dogs and beer.