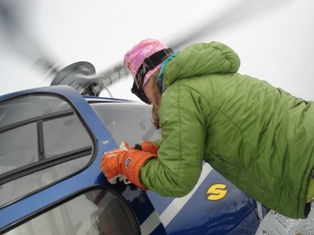 By now, most skiers have heard about the slide in Revelstoke and the danger that has been present for some time in the Selkirks and Monashees. One of the seven females certified through the AMGA, ski mountaineering guide Anne Keller gives a wrap-up of the layers and dangers out there, since she has spent the last month in Revelstoke.

Here is what Anne had to say about the conditions, in addition to a Haiku she wrote about the snowpack:

face down the bright white places—

The recent avalanche accident on Boulder Mountain, near the town of Revelstoke has drawn international attention to this year’s snowpack stratigraphy in the Selkirks and Monashees. The Canadian Avalanche Center has issued special warnings regarding avalanche danger for the last three weekends.

The El Nino climactic conditions have set the stage for one of the more volatile layering structures in many people’s memory; The combination of higher temps with warmer snow events, interspersed with long periods of clear weather, have laid down a series of significant buried surface hoar layers. Surface hoar is that beautiful sparkly crystal that forms on the snow surface following cold clear nights (different from depth hoar). If it gets buried it can create an unstable layer in the pack. As of this writing, there are four main interfaces, which have been named based on the day they were buried; the March 7, February 24, February 8, and the January 24 layers. These layers can all be found within about a meter and a half of the snows surface and as such, are very reactive to skier triggering. Generally this structure is widespread throughout the treeline and alpine elevations, with North through East aspects being the most sensitive. Solar aspects have a series of crusts at the same interfaces and have been waking up as radiation intensifies.

The most recent storm event on March 11 and 12 came in with significant wind and precipitation, increasing load and forming slabs over the existing surface hoar sandwich (actually more like a multi layer torte). The result has been a widespread avalanche cycle with slides initiating on layers closer to the surface and stepping down to deeper layers. This was the set up for the Boulder Mountain accident.

The take home message here is that it’s not the time to get complacent if you choose to venture out. Numerous natural, human triggered, and remotely triggered (means you can trigger an adjacent steep slope from low angle terrain, sometimes from quite a distance, and sometimes from below). Avalanches are being reported daily throughout the range. Guiding operations are sticking to terrain that has been heavily skied all winter and to very low angle low consequence terrain with no overhead hazard.

This is a great time to hone your avalanche skills. Instead of focusing on skiing the big line, dig a pit in a safe location and see if you can identify all the layers. You will be impressed. For current avalanche bulletins, go to www.avalanche.ca and for field reports from certified guides check out the public mountain conditions report or MCR at www.acmg.ca.

Anne has a few female specific courses and tours coming up this spring, which is a great opportunity for aspiring ski mountaineers and guides or just mountain lovers to learn from one of the most knowledgeable and experience guides out there. Check out her website or send her an email if you are interested. She is awesome, trust me!