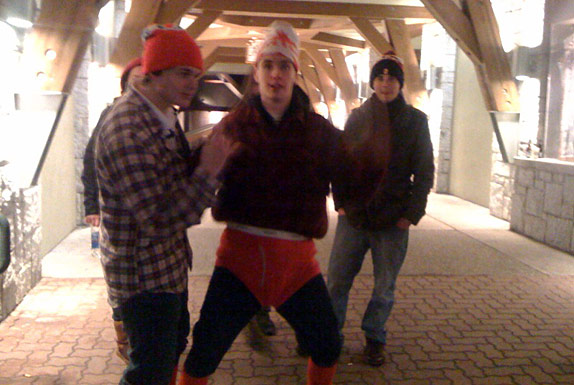 Whistler, BC – Although the Games have officially been over for almost a week, I am just coming down off it all now and all of Canada is still trying to figure out what to do with their recent national upwelling: An international All-Star hockey team vs. Canada? A 100-foot high statue of Ann Murray in Nova Scotia? A military invasion of Orcas Island? It’s hard to say. I am simply glad I had the opportunity to enjoy the festivities… and get the hell out of Dodge before the real drunk Yankee-Go-Home action hit on Sunday night in Vancouver. And although I lost $20 (never bet against the line in sports) on the game, I am almost glad Canada won The Hockey Game. Almost. For even the most mild-mannered and total non-sports fans in Canada, it clearly would have been a crushing national blow. They would probably already be on the beach at Orcas. For global chi, it is good they won. And what a freaking game, eh?

Staffer John Laing, out partying with Jake Bogoch of Skiing Magazine, ends up at a star-studded party where he asks one gal (apparently oblivious to the fact she was still in full race gear): “How was your day?” To which she responds, “Pretty good. I won a silver medal in the bobsled.” John: “Cool.” Later, Mr. Laing, upon hearing something notable about one of the guests, walks up to him and asks in earnest: “Are you the Prince of Monaco?” He was, and simply stared quizzically while his security detail pushed John slightly to the side, and called for the car to swing around front. Bode Miller was also in the house. Laing is like that.

Jessie Lu, Jessie Carlson and myself make our ways to the medal ceremony for the Men’s 4X7.5 KM biathlon relay, Women’s Alpine Slalom, Women’s PGS Snowboard, one of the 10,000 skating events which now escapes me. Afterward K’naan, a Somali-Canadian immigrant from Toronto, put on an amazing show, running through his repertoire of hip hop, Afro-folk, and spoken word to a captive audience. If you have not heard the man, get on iTunes right after this and get some. The African Bob Dylan. Amazing. Afterward, encounter a group of plastered young men with face-painted maple leaves and one sporting a sweet pair of tighty whiteys (red, of course) on the outside of his jeans chanting “Boo-S-A; Boo-S-A!” as loudly as possible outside Citta’s. They were stoked to have me take their shot.

After some laps off Jersey and the Glacier chairs, I opt to head down to the Longhorn and watch the US bobsled team win their first gold medal in the event in 60+ years. The 15 different screens with almost as many events on feed were fairly impressive and provided the best coverage and vantage of the games. The tables of Norwegians trying to shout down the tables of Canadians during the men’s curling finals was an impressive contest in itself. When curling fans go awry, watch out.

We finally leave Whistler, climb into a large American diesel truck, put on Jay-Z and Rhianna’s “New York” and head back for Freedomland. For some group-think reason, we drive straight into the heart of downtown as the throngs are just starting to swell. As we pull up to one particular intersection near Robson, Laing looks down from his driver side perch and says, “Hey that girl is puking out of the cab.” We watch for a few minutes before moving along. Arrival at YVR airport and our previously parked Subaru, forces Laing to pull into the main departures lane when we realize that the height limit for the parking lot is 2 meters, or two and a half feet. You’re cool to park and fly as long as you drive a Miata.

Arrival at the border, like all our border crossings over the duration of the Winter Games is met with a near vacant Customs facility. Homeward bound.

Perhaps the best story of the games I heard was from a friend of mine describing a girlfriend who, about an hour before The Game on Sun, decides she wants to drive up and check it out; walks up to will call with 14 min left in the 2nd period and dude hands her a good seat at face value. Watches one of the greatest hockey games in the history of the sport. Then calmly gets in her car and leaves the sea of red.

For having started out with myopia and malaise, the Whistler Olympic Games rallied to be the most energetic and insane outpouring of stoke the IOC has ever seen. Good times. Thanks much to Michelle Leroux, Ryan Proctor, Christina Moore, and Stephanie for their hospitality and help in attending this amazing scene. Looking forward to Telus already.