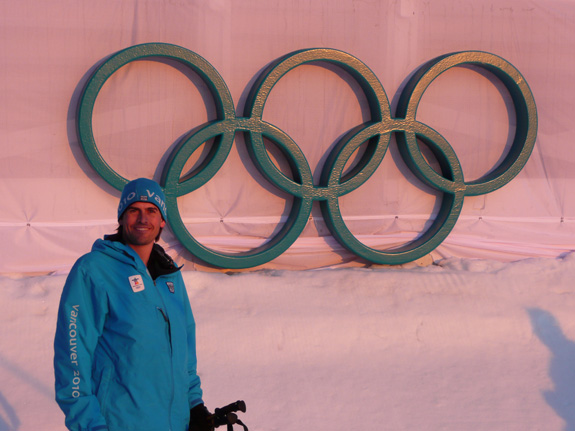 Every fan of the 2010 Vancouver Winter Games has their Olympic moment. For me it was screaming from the grandstand while ski cross athletes such as Chris Del Bosco went huge for gold under bright Cypress skies then taking in round one of US-Canada hockey at Seymour’s Pub below the official Park and Ride. Flag-waving and face-painted energy from my five-ring memory still sustains, but like most who navigated an IOC maze of ticket lotteries, transit queues and security lines, my access was temporary and restricted.

Yet longtime Mt. Baker hardcore Rene Crawshaw earned a first-person Olympic perspective from start to finish. As a volunteer coursework team leader for all four cross events—as well as for the mogul and parallel GS competitions—Crawshaw put in 27 consecutive ten-to-12-hour days battling spring-like snowmelt, hand-shaping features and constructing what competitors viewed as a near miracle of a phenomenal racecourse.

“Everybody’s dreamed about being in the Olympics and competing at a world level. And none of the sports that I competed in were in the Olympics so it was a great opportunity to be part of something special,” says Crawshaw. “And I think being an athlete you know how the course needs to be so you almost have a perfectionist view of the course. And you know the amount of hours you have to put in to make it perfect for them.”

Crawshaw secured his position through a four interview process with the Vancouver Organizing Committee (VANOC), a nine-day trial period at Cypress Mountain’s 2009 FIS World Cup event, a clean RCMP background check and six days of training that covered subjects from event planning to team leadership. Due to his performance at the FIS event, his past as a professional freeskier and his experience as a course official at Mt. Baker’s Legendary Banked Slalom, he was given responsibility for a rotating crew of fifteen volunteers as well for the sixth-through-seventh sections of the twelve-section Olympic cross track.

Starting up top from square one, his crew worked to execute the vision of White Industries course designer Jeff Ihaksi by helping turn straw bales, plywood forms and mounds of snow into an Olympic-caliber racecourse one feature at a time. When the gates opened his crew kept their section rut-free between training and competition as well as smoothing it out before it set up at night. For his extra effort on one stubborn hard-to-reach corner, the cast and crew christened a prominent bank “Rene’s Corner,” but he earned more than name recognition from three hundred hours of labor.

“It’s hard to find a word to describe it. It’s just an awe, being there and actually seeing a few of the events where Canada did win a gold medal and it felt like all of your hard work actually paid off,” says the proud Canadian skier. “And then having [the athletes] thank you at the end for such a nice course, even if they didn’t win, they just loved the course.”

Crawshaw counts his favorite all-access Olympic memories as witnessing four Canadian gold-medal performances at his venue, being sprayed by Ashleigh McIvor’s victory celebration in the wax room while toasting with Team Canada’s coaches and taking his daughter Winter behind the ropes to see the torch relay in his hometown of Chilliwack, BC.

The coastal Cypress weather caused a few low points, but, he says, the crew understood failure wasn’t an option. “We pulled something from nothing. Between the full-timers, the helicopters and all the contractors bringing snow up, this all went together,” he marvels. “A lot of people thought Cypress Bowl wasn’t going to be a success or even be able to pull off any of their events. And no events got cancelled or postponed so it was a huge success.”

With his coursework done, Crawshaw is still under the spell of Olympic afterglow and he has set his sights on one more shot in 2014. As Sochi, Russia prepares to take center stage, he aspires to again be part of the course crew that will build the fast track to gold-medal glory. Only time will tell if he will once again be watching intently from his own Olympic corner.