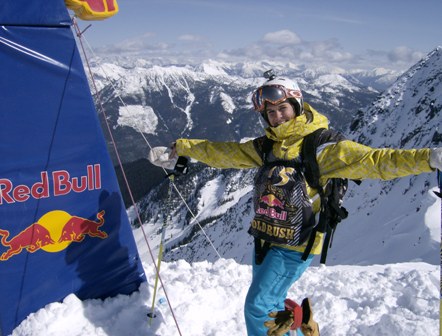 She is one of the first people I will brag about to friends: this girl base-jumps, hucks double back flips, ski-base jumps, and works as a stunt double. At one point while living in a house with Suzanne and a few other competitive female skiers we had packages addressed to the house as the “extreme estrogen establishment.” Suzanne represented a majority of the “extreme” and continues to do so; winner of the recent Red Bull Cold Rush and filming for Grete Eliassen’s upcoming movie “Say My Name”, Suzanne Graham continues to prove her exclusive talent.

Whenever I would brag to those friends, I always threw in that Suzanne was the only girl I knew that did double back-flips. I was never really sure if she ever did; now I know she does. At the recent Red Bull Cold Rush competition, based out of Retallack Lodge in B.C., Suzanne did double back-flips. Actually, she did two. And she won. The first Cold Rush competition to invite women and Suzanne of the “Extreme Estrogen Establishment” won.

Another story I often bring up to friends, strangers, or anyone who wants to listen, is about Suzanne working as a stunt double for a Japanese pop star last fall in Alaska; Decked out in a thousand dollar coat and her skis and boots painted white, she ski-based off a huge cliff in Alaska, so that a Japanese pop star could look like as much as a Diva as Ms. Graham is everyday of her life.

Walking across the University of Utah campus, where Graham is studying for her nursing degree, you would never expect the kind of adrenaline kicks she experiences almost daily. Petite, humble, and non-intimidating, Suzanne often follows up a day at class with base-jumping off nearby cliffs with her boyfriend, Jesse Hall, and friends. Not baking cookies, but she actually does this also. The unique thing about a gal like Suzanne is that she participates in activities that the rest of us do; she spends time with family, bakes, cleans up the house, and goes to school, without telling everyone about the much cooler things that she does. I guess that is why she has friends like me, so that I can brag for her.