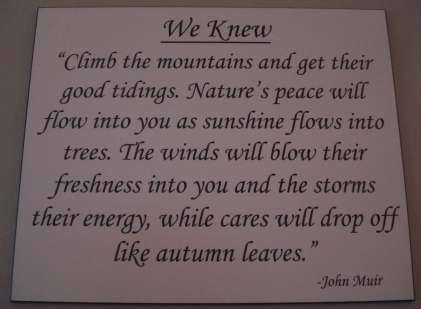 A few years ago the Giffin brothers were featured in a ski magazine piece illuminating the family’s talent in the snow sports industry: Jeff, the oldest and a tele-skier, Zack, the overwhelmingly motivated pro-skier, and Sam, the snowboarder and award-winning filmmaker. Now, Jeff attends UBC as a graduate student, Zack continues to push the limits on skis, and Sam still wants to capture the spirit of the sport and answer that inevitable question: Why? Why Ski?

Mt. Superior in Little Cottonwood; just one reason why I ski.

Right On Brother’s first production “Return of The Nina” finally satisfied my hope that someone out there could express the magnetic pull some of us have towards the mountains and snow. A genuine portrayal of the changes that come with the seasons and the years and how skiers and snowboarders adapt and alter their lives to become part of the cyclical process of skiing and then not skiing. Whether summer or a low snow year, disappointment ensues as the snowrider waits for their constant to return; they wait for the snow, but why? Why do they wait to ski?

Sam Giffin’s new project “YtheMovie”, seeks to delve into this issue even further, focusing on the lives of a few skiers and snowboarders to understand why people devote an entire lifetime to playing in the snow. Inspired by time and discussion with his older brother, Zack Giffin, and propelled by his own questions about pursuing snowboarding as a profession, Sam explores risk and sacrifice and the unavoidable connectivity these topics have in the quest of careers and dedication to snow sports.

Featuring athletes such as Chris Davenport, Jaimie Pierre, and Gigi Ruff, “YtheMovie” will provide the kind of character building footage missing from so many of our favorite ski flicks. With minimal main characters, Sam’s film will avoid the shallow perception and stereotypical answers to questions regarding a life of pursuing snow, which will help bridge the gap between skiers and non-skiers. In the end, the film should serve as an inspiration to anyone to follow their own arts and passions.

Currently a student and winner of multiple film festival awards, Sam seems to be answering his own “why” questions throughout the process. Focusing on the organization of film crews and production logistics, Sam is learning what it takes to inspire people to come together and produce a creative, authentic answer to the question of why people take risks to pursue their passions.

As Sam told me, “A very common answer is why not? Why not pursue my art or passion”, when I asked him if there was continuity in most of the answers he heard. And because Sam has decided to chase his own, finally as skiers we will be able to listen to others articulate their reasons and help us understand the roots of our own.

Check out the trailer for the movie and visit the site to provide feedback.