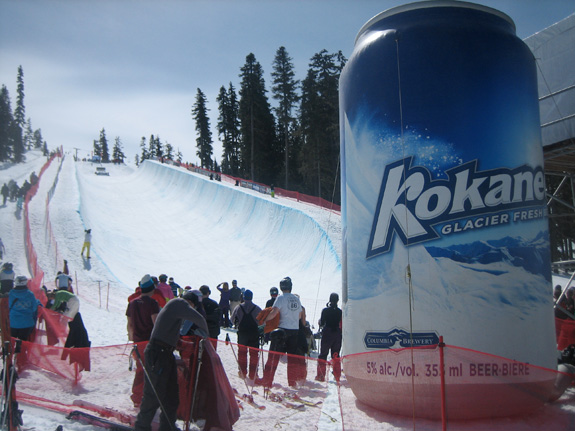 It’s been years since I wished for a rain day. But after four consecutive days at the World Ski and Snowboard Festival, a grey day focused on recovery is what my legs and my liver really needed to make it through the rest of this week. And to be honest, a break in the perfect spring weather was my only legitimate excuse to slow down from a nonstop string of cultural stimulation, harmless flirtation and late nights of bar time in the village.

I’m not much for crowded runs and club lines, so I’d avoided Whistler’s biggest spring party for the better part of a decade. But this season with Ski Journal photo editor Grant Gunderson competing in the pro photographer showdown and an invitation from Whistler/Blackcomb for complete VIP immersion into the festival, the opportunity seemed too good to decline. So I headed north on the 99 to see if this legendary event was worthy of all the hype.

My virgin descent into the festival madness started Sunday with bright blue skies, perfect cycling corn and a double feature of festival culture. In some bar, in some corner of the village I took in Pecha Kucha, an event where Whistler residents spoke for 20 minutes—over 25 slides—about their non-snow passions. The rapid-fire rambles ran the gamut from Leslie Anthony’s snakes to Lisa Richardson’s slow foods cycle. But the sold out highlight of the night was the fashionable ski-town socializing in the Festival Centre art gallery and a packed house premiere of the mountain bike film Follow Me Around.

Two days of sweet corn later, the World Superpipe Invitational went off with pipe stars boosting nines, tens, twelves and fourteens in the 22-foot superpipe. For the record Walter Wood and Jen Hudak won, but by the time the results were tallied I was back milking lift-access corn on the Glacier Express Chair.

As après rolled onward yet again, I escaped to Whislter’s new Scandinave spa for eucalyptus steams, a Finnish sauna, dips in the cold pool and some chill time in the solarium. Three hours later I queued up outside the festival centre beside Mike Douglas for the 72 hour pro photographer showdown. It’s all a bit of a blur but the American team won with a creative film titled Panty Bloom. It gets even blurrier later but the evening closed out at the Longhorn with Five Alarm Funk and recovery poutine at 2AM.

I’m still digesting the visually stunning Mike Parillo/Travis Rice art show in Blake Jorgenson’s gallery from last night, and still recovering from another late night. But for sure, the climax of the week is tonight’s sold-out pro photo showdown and I’ve got my ticket. Thank god I had the rain day yesterday because the WSSF fatigue is hitting me hard this morning. And, unfortunately, its bright blue again outside.