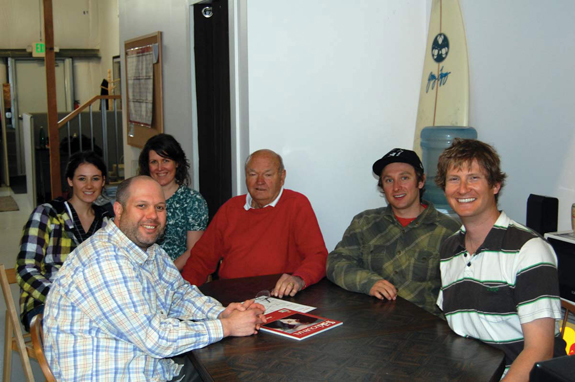 Following up from my interview earlier this year [forthcoming this fall] our new friend and favorite Island County resident Mr. Warren Miller was gracious enough to visit our humble offices, poke around and try to take my dog home. Ostensibly his purpose was to drop off some edit for us en route to a doctor’s appointment, but when he forgot the piece, we simply had a nice visit chatting about Hannes Schneider, Howard Head, the state of the contemporary ski industry and his latest crusade to deliver ski gear to a particular village in India where he had filmed previously.

The thing about Mr. Miller (which he does not like to be called; “Who’s that?” he says) is that he is every bit as engaging, entertaining and as wry as you would expect from his films. So many times, you meet someone who’s private persona is nothing like a cultivated image that they have sold the public. Whereas Warren clearly is as happy sitting down at an old card table in a warehouse outside Bellingham, WA telling his stories, as he is in front of an audience of ski area executives – in fact, he is definitely happier sitting with skiers and snowboarders in a bucolic space these days. His attitude towards skiing and life is as pure today, hanging with the members at the Yellowstone Club, as it was in the 1940’s — eating oatmeal with fellow ski bums in the early morning off-hours of the Sun Valley Lodge bowling alley. The man is a testimony to living well and living happily.

When I was a grom at Alpental, banging gates in Mitey Mites, and completely enthralled with movies like “Ski People” and heroes like Phil Mahre and Scotty Brooksbank — if someone would have told me that one day, I would be publishing The Ski Journal, and that Warren Miller would come visit and befriend my staff, I would have thought it too amazing to even imagine.

Stay tuned for the issue with Warren’s interview, including 75 years of archival images and incredible tales. And go ski some more; it’s still hammering snow at altitude in our neck of the woods. Because, you know; if you don’t ski in May this year… you’ll only be another year older when you do.