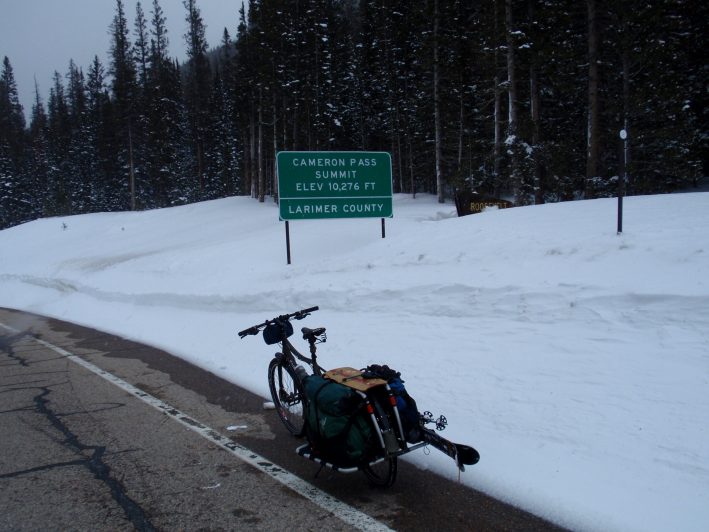 The press release that I received from LaVanchy for what was to become the first annual “Totally Hard Core” ride was a vague supposition at best, hinting at a legitimately grueling, nearly incapacitating adventure. Even for Ft. Fun’s favorite sons and daughters, the disciples of hops otherwise known as the friendly staff of New Belgium Brewery, this invite hinted at the trappings of cabin fever common in the late days of the Colorado winter. While the brewery sponsors its fair share of events historically imaginative, only an aerobic deviant would spring us with the plans of what was to become Totally Hard Core.

But this was not cabin fever. This was the brainchild of Aaron LaVanchy, popularly known throughout Ft. Collins as “The Professor.” The invite still didn’t compute in my head. Something about a self-supported ride up the Cache La Poudre canyon to Cameron Pass- a distance of over 70 miles that few of us were geared up for this early in the season along a suicidally narrow shoulder- with an unspecified end date, “depending on how fast we are moving.” After a wintery ride to the pass, a back-country ski trek would ensue on South Diamond, followed by a slog home, a cold and wet 70 mile return trip. True to the non-competitive community that New Belgium has fostered, Professor added an almost unnecessary caveat: “this is not a race, and spandex is not required. If you don’t want to do the ski part (not sure why), you are more than welcome to come along for just the bike and camp part. Hope you can make it.” Ride and not ski? Madness.

A shocking notice to receive, but even moreso to imagine that THC would become a reality. The few and the proud turned up on the morning of April 30th, however, and the leap of faith began. New Belgium had decided not to help sponsor the ride, given the potential conflict of interests, anagramatically speaking. Of all those invited, only Hard Cores Aaron LaVanchy, Eric Unger, Sadie Skiles, and Kristine Weyer were bold enough to make the trip. Gear was attached creatively and efficiently, with the promise of fresh snow lurking at the northern terminus of a stretch of mountains named, fittingly, the “Never Summer Range.”

The crew left Ft. Collins on Friday afternoon, riding the initial 40 miles to Glen Echo resort for beer and dinner, followed by a nocturnal 10 mile push to find a camping spot. The next morning was met with the final 20 miles biked to Cameron Pass against a brutal North Park headwind, strong enough to ring the bell on Unger’s bike. True to form for the charmed life of Professor, the clouds broke just in time for skin tracks to be laid and turns to be made. Sensing the clouds building ominously over the Nokhu Crags to the West, the Hard Cores retreated at full speed back to Glen Echo for pizza, beers, and blueberry pies. Per LaVanchy, “I think we were the only four in there with a full set of teeth- but they gave us a hero’s welcome when we rolled in. People came out of the bar like it was the Tour de France. Since the resaturant was already closed, they had to get the owner to unlock the kitchen for the pie.” After another night of camping in the Poudre Canyon, stuffed on pie and lactic acid, the foursome rode home to the Fort through snow and hail, though all were happy, and earned the moniker of “THC.”

All told, the first annual Totally Hard Core included 140 miles of riding with 5300 feet of elevation gain, plus another 1000+ feet of skinning. All participants received custom-made commemorative belt buckles crafted from recycled Colorado license plates. LaVanchy, himself an avid backcountry skier, hopes that the event will become an annual tradition. “People seemed stoked or thought we were freaks.” When cabin fever or similar madness strikes your neck of the ski-country woods, nod your hat to Professor and his belt-buckled friends, living the dream for all of the spring-fever sinners, and ride your bike to the nearest alpine skin track. Who knows? There may be some rogue pie in it for you.