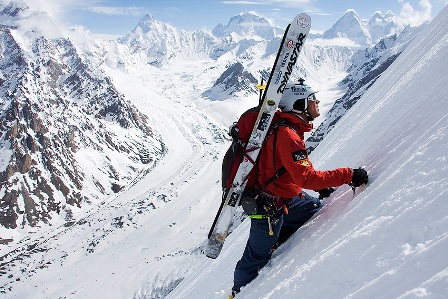 With news of deep snow on the Baltoro glacier, Ericsson and Cook changed plans and decided to approach K2 via the Gondoro-la glacier, with an attempt of Laila peak on the way.

“The pit, in and of itself, was inconclusive. When pressured with the kind of force that would represent a skier executing a silky smooth jump turn, a layer did, in fact, release but it wasn’t the kind of sheer that shrinks your cojones and sends you tiptoeing for the nearest safety zone. The summit was literally straight above us, just a few more hard hours and we’d be there. On the other hand, the northwest aspect of Laila is a massive, flat and featureless 45-50? tabletop and it was easy to imagine that any kind of fracture would release the entire face. It’s times like these that I find it useful to pause for a moment to reflect on my priorities in life,” says Ericsson on his blog of the decisions made which ended in turning away 300 feet from the summit of Laila.

In this case “unusually deep snow” kept Ericsson and Cook from the summit of Laila, but conditions are changing to favorable for K2.

For an updated report on the expedition, check out Fredrik’s site.