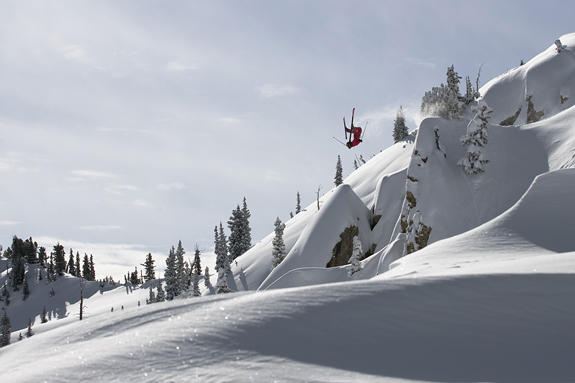 During the summer months we gave readers and fans of Ms. Rachael Burks (featured in Issue 4.1) the chance to ask her some questions. Here, Ms. Burks responds:

You are an awesome skier. But what do you do to get even better? What advice would you give other girls to become better? Girls have in general less power, but more rhythm and feeling. Could you not develop girl’s skiing in a direction that used your advantages and make the boys think “Wow that was cool; wonder if I can do it?” Keep on rocking!!! Cheese.

Wow Cheese. This is an interesting question: The idea that biological differences between women and men enable men a “power” advantage and women a “rhythm” advantage; and therefore how would women use this advantage to move feminine advancement in a different direction…

I might argue that there are many more men out there that have “rhythm” and “feel” better than women. . . Have you seen Pep Fujas ski? Dylan Hood? Sage Cattabriga? Those guys make skiing look like a dance. I don’t know any women that look that rhythmic or have as good a snow feeling as those guys? But I do think that the women in the ski industry that dance – do so better than the men ?, so maybe there could be an advantage— let’s keep that in mind:) –I think we just need to keep on truckin’ without inhibition and reservation:

Women shouldn’t be discouraged by biological differences. Yes, they exist- however they should be encouraged to pursue “power” as much as pursuing powder. Just because the biological make-up of women is different than men doesn’t mean that they shouldn’t aim for greatness in any athletic field. Greatness is wherever your passion is—aim high—see how it goes.

So answering the initial question: Q.) What do I do to get better? A.) I keep working hard. I stay active in the summer, I train hard in the fall, I’m never satisfied with the status quo, I’m always looking to push myself so that I can get better – and LEARN something every day that I ski.

Why do you find me so attractive?

Oh Matt, I find you so attractive because you are a one-man wolf pack.

Hey Rachael!
You’re totally rad and I was wondering when and if you ever plan on coming over to shred the east coast so you can entice me to huck off something bigger than 5 feet? Keep rocking girl you’re a total inspiration to 30yr old skier girls like me!

Holy east coast batman. Hell yeah, I’ll head out there some time. I hear it’s awesome. I’d love to go experience the east coast in the winter. Problem is that in the kickass winter months…it’s grindstone zone for putting together a segment worth filming–however if I head out there and shred… I’m counting on you to show me around your zone. We’ll for sure find some stuff to jump off… it’s my fav thing to do.

Just read the article about you in Ski Journal. My question is: If you ever break up with Rich, would you consider going out with me? Thanks, and tell Molly Baker I think she’s hot too.

Schmeeding, of course I would consider dating you if Rich and I ever broke up. Until then, we need to hook you up with one of the fine women of the ski industry. Ladies—he’s hot, fun, single, great skier /surfer/fisherman, and has a great taste for wine and good food…his van smells of mahogany and leather bound books I can get you his number if you’re interested … J Molly- Ryan is awesome…

Note to Rachael: Oh, I know Mr. Schmeeding. And although I whimper at the smell of mahogany and faint at the sight of a man with leather bound books, there is one caveat: He doesn’t have a sense of humor.

What is your favorite fruit?

It is the simple stuff we sometimes don’t know about our best friends, Julian. Thanks for asking.