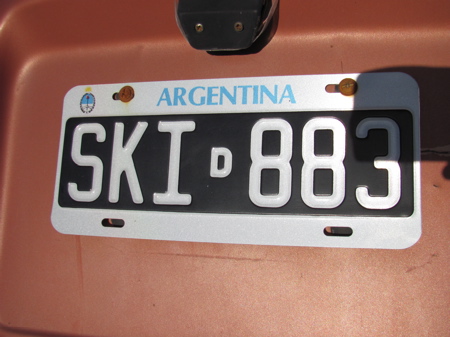 Amidst the stray dogs, mini cars, and chocolate shops, I walked the cobblestone streets of San Carlos de Bariloche today. A day off from skiing and I was reminded of why I ever wanted to be an athlete in this industry: to travel the world and ski. Enamored with the quaintness of this town and blessed by the gifts of the Santa Rosa, I can accurately say that I am living my dream.

Staying for a week in the Gran Hotel Termas de Chillan, slippers, multi-course meals, and a spa all included, left me with a feeling that something was missing. It was not until I arrived in Argentina, crammed into a hacienda with six other skiers, including four of us in one bedroom, that I realized what it was: Authenticity. Whether generational or cultural (speaking of skiing culture, not American), this is what I seek. And after modestly searching and ridding myself of the rigid sterility of a five star hotel, authenticity is exactly what I have found in this nook of South America known as San Carlos de Bariloche.

Papas fritas, bife de lomo, chocolate, and vino abundantly grace any visitor to Argentina. Brazil imports all their beef from here and honestly, I will forever shun any American raised cow. Grass-fed is the standard and all naturally raised entrees are served in epic proportions. Paired with ensalada completa and a glass of wine, one can easily forget they are here to ski, incapacitated by severe symptoms of a food coma.

But morning always comes and along with it, skiing. Cerro Catedral, the main ski area in the region, supplies the North American skier with a steady, but gradual drain on the pocketbook; tickets are $150 pesos, or about $40 dollars per person. As far as skiing and terrain, Cerro Catedral is on par. Spires, steep slopes, and couloirs litter the resort and surrounding backcountry. It just doesn’t always have enough snow. Luckily, this year, the Santa Rosa favored this part of South America, leaving other ski areas with the dusty residue found at the bottom of any notable Argentinean wine. Literally. If you haven’t seen photos of Las Lenas prior to the one and only 12 inch storm that hit last week, dirt and dust are the only two words to accurately describe the scene.

In Bariloche we experienced the other end of the spectrum, an abundance of snow. Lifts have been dug out. But it is still South America and there are still rocks. “Dry docking” takes on a whole new meaning, especially for those of us from the Pacific Northwest. With myself, photographer Grant Gunderson, and athletes Zack Giffin, and Angeli VanLaanen, we navigated the rocks, sometimes skiing over them, but more often in between them. The reward at the end of the day is always dinner.

Tonight I may order beef or beef. When in Rome, right? My cholesterol may be rising as my cheeks redden with another glass of wine, knowing that I will probably not sleep much tonight after dancing at the local disco, but at least when my head crashes on the dirty pillow of my four person sleeping hole I will be thinking and feeling “autentico.”