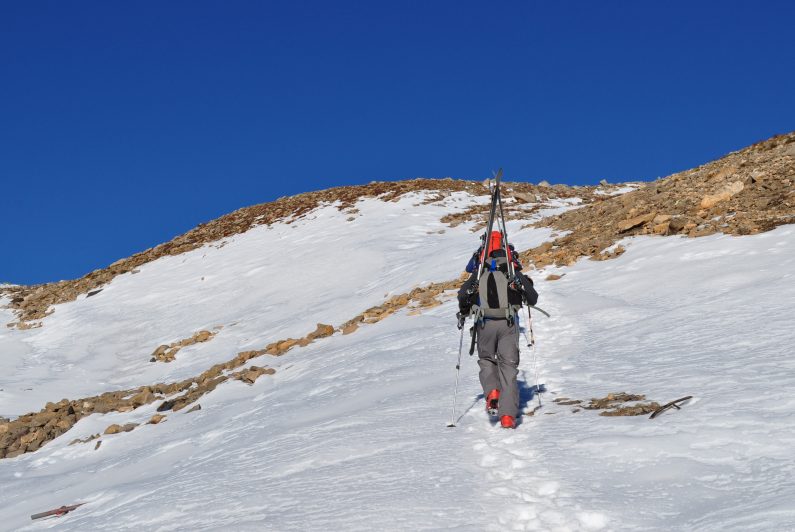 Victor’s words echo in my head:

“You are all-in with skiing, aren’t you…”

This accusation had never been voiced before. Passionate? Yes. Dedicated? Yeah sure. But “all in” seemed a bit… judgemental? After all, I do enjoy some other activities. Writing, for example. Although it should be noted that I mostly just write about skiing.

Nevertheless, our annual call to Ullr was sounded through his namesake party, and according to tradition the snow began falling the very next day. This was, of course, too much for us to bear. We resort to skiing all sorts of late summer nonsense that passes as “snow” just for the sake of the thrill. August and September’s ski days are especially cruel, though their lean nature builds stoke for the coming season.

So here we are. Le Rouge, Professor LaVanchy and myself, an alpine start on a flawless autumnal Friday, choosing our toil. Why? “I just want to get out of this rat race and breathe in some mountain air!” pipes Professor. Le Rouge’s reply is identical. Nevermind that we have all opted to bring plastic boots and P-Tex… “just in case.” We scan the front range, and set our sights on James Peak, a 13,000 foot matriarch splitting Berthoud and Rollins passes. At the foot of the eastern flanks of James sits what summer has seen fit to leave of St. Mary’s Glacier, a year-round snowpack that should guarantee at least a few turns. Can dirty snow yield pretty lines? Ugly skiers still make pretty turns, I point out.

It should be mentioned that the previous night we had seen Andrew McLean present a slideshow of his ski-mountaineering adventures in Denali. Images of descents from 20,000 feet put an early winter back country day in its place, but the stoke is universal. I imagine that somewhere in Vermont some poor soul is skiing today out of their apple tree, and feeling every bit as fired up as ourselves and McLean.

LaVanchy is our social caffeine, and his barrage of incomparable stories livens our rusty heads. “My neighbor has a pet turtle named ‘Tardy Slip’ that she recently lost… and he wasn’t even riding his turtle skate board that she made for him.” The dictionary definition of somebody who shouldn’t have a pet, adds Le Rouge. Tardy Slip is an appropriate name, we concur. Professor notes that a local Ft. Collins bar has a drink named after him- a sort of “hush-hush” drink that currently enjoys the same cult status as In-N-Out’s secret handshake menu. “It was originally made with organic wormwood, but now they just use absinthe.”

We are the only car at the glacier trailhead, and not a cloud in the sky. The familiar rhythm of touring will have to be postponed today, as low-elevation talus and scree is not kind to our bases. I lock into rhythm on the alpine-steps. Mumford & Sons, and all inherent jollity-ridden angst. Before long we are above the mayhem, in the fond and desolate surroundings of the alpine. There you are, winter wind! Where have you been all my life, endless panoramic views?

We pause at a windbreak at the foot of our skiing objective, digging for whatever morsels we had the common sense to pack last night. True to form, LaVanchy digs out some crunchy granola, while I find my stash of Oreos. Somewhere between hatching a plan to ski Washington’s Desolation Peaks as an homage to Kerouac and Gary Snyder and Professor telling us that his Mystery Ranch Sweet Pea pack has a feature that makes time travel possible, we spot the porcupine quills. Must have died recently, we comment. At least he bade farewell to the world with a nice alpine view. He was a good porcupine, we lament. I respectfully commandeer a single quill to remind myself to avoid being buried in snow. Brotherhood of the quill, we are. LaVanchy’s stories about skiing Mt. Shasta with a friend donning a fake sheriff’s badge bring us back to the moment, back to the Oreos, back out of the brush and into the wind. Upward.

The higher we hike, the more promising the snowpack. Opening Day, we muse. Mumford & Sons remains in my head- the slow pulsing a good mental companion. Although we have been hiking all summer, it is rarely in plastic boots, much less with skis on the pack. Too thin to skin means sore backs tomorrow. All skis are rock skis, we repeat.

Descents on the fall’s first snow tend not to lend themselves to an epic telling. Turns are made, smiles are had. McLean made the same point in his show last night. Pretty turns don’t come easy on death cookies. Or in willows. But skiing is skiing, and the endorphin rush exhausts all pessimism in favor of the feel of the turn. The lower we ski, the warmer it becomes, and our turns resemble the corn glory of a Colorado June. People are arriving as we finish the day. Professor drawls that the early bird has gotten the worm. Le Rouge reiterates that the late bird gets the girl with the $2 perm. On the drive home we descend out of an early vision of ski season 2010 / 2011 and back into the perfection of a flawless fall day, the rat race, and the reason that we plan our weekly escapes to begin with. But fall being what it is, our fires are not likely to go out anytime soon. After all, our season has already begun…

So am I all in? I wonder again after slaying 8 inches of icy nonsense on a windy morning in which my more reasonable friends were enjoying the front range? Perhaps. Maybe this is my life’s love’s investment. And then I apply the day’s song to the moment, and a smile grows slowly on my face. The brotherhood of the quill is but another name for anyone whose blood begins to boil when the peaks turn white- not for bravado or in the name of one-upping the crew, because today’s turns certainly are not worthy of bragging. Only another deposit in life’s chest of tales, of memories, of… what’s the word? Leave it to Mumford. Opening Day is behind us.

In these bodies we will live

In these bodies we will die

And where you invest your love,

You invest your life…