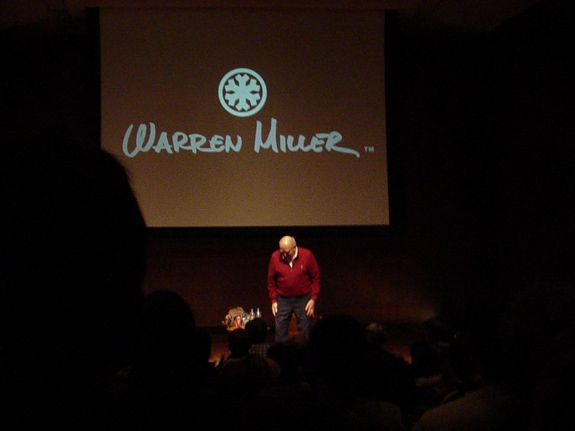 Though it has been several years since Warren Miller has produced a movie, narrated one and/or has been on a film tour, you could’ve sworn the 86-year old ski sage had just rolled in from Alta and had a dozen more stops to go. In a first-ever of it’s kind, Warren Miller took center stage last night at the elegant Benaroya Hall in downtown Seattle and brought a rapt audience to tears — both with laughter and poignant stories. As the lights dimmed, Warren entered stage left to standing applause that lasted several minutes. Clearly, it was a moving moment for him as well, as he cleared his throat and began to drop deep into stories and ski history.

As the audience, which ranged from eight to eighty-plus settled in, Warren went straight to the good stuff with tales of the invention of the chairlift, the early days of Sun Valley including his own trailer stint with friend Ward Baker, moving to Squaw Valley, purchasing property in Aspen for hundreds not millions, strapping Jean Claude Killy to a heli skid in hasty departure, and reminding everyone why they ski with the simplest of axioms: “You can only make one turn at a time.”; “Whatever resort you are at, that is the best one in the world.”; “You are a different person at the bottom of each run, than you were at the top.” The intimate environment of the lecture hall, his classic demeanor and voice, and the mutual appreciation between audience and story teller was miles away, and miles better than the doppelganger current corporate ski film which showed in the same space only a couple weeks earlier. This one was for those who get it.

After the first portion of stories, including a show and tell with his first-ever Bell and Howell camera and a poster from his first ski film in Seattle (at the Metropolitan Theatre), he gave a wry dissertation on the development of modern skiing vis-à-vis current fashion (“They say it was Howard Head’s metal skis, or Bob Lange’s plastic boots that grew skiing in the 1950’s — but it wasn’t either. It was Maria Bogner’s invention of stretch pants for ladies… and today they look like they are wearing a sack of cats headed to the river.”)

After a break for a slide show of his vintage photography, the old master came back for some Q and A. Subjects were wide ranging and Warren did not miss a beat. He told a moving story about teaching a young girl with spina bifida to ski, said his best day of skiing ever was the day he met his wife at the Roundhouse in Sun Valley, and when asked about global warming, simply quipped: “I don’t know; you’ll have to ask Al Gore,” before reminding all he was a film maker and not a scientist. In closing, he evangelized a bit on his lifelong mission: “If there is anything I can leave you with, it is this: If you want to do it, you can.”

70-years after lighting out for Idaho with a teardrop trailer and an old Packard, Warren Miller continues to be living proof of this.