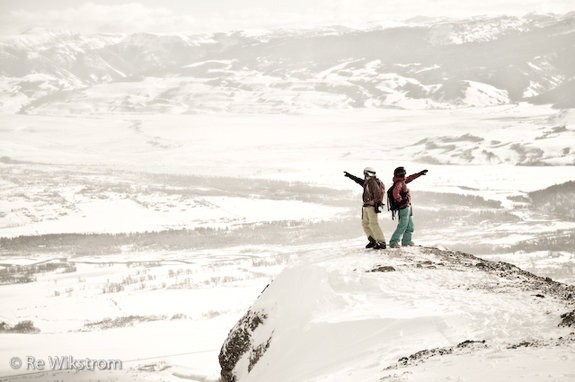 My houseguests are still sleeping, and although I want to grind the coffee right next to their heads, I‘ve decided to refrain, as they did arrive at 3 am. The visitors can have a little slack, but not for long. I’m only about fifteen minutes worth of considerate-which given the situation, is pretty darn generous.

This is because it’s another day with new snow here in Jackson Hole, which perhaps by this point in the season we should all be used to, but powder days don’t work like that no matter where you are. A month into skiing powder, and two weeks into the tram… there is still no legitimate excuse for resting now. Nor will there be. All across the west, it is the same story. But not every ski towns’ collective quadriceps are brutalized by the 4000’ tram lap… but no one is complaining.

Each day, it seems as though our little town is full of centenarians in the afternoons. Skiers lurch about, grinning at each other, dogs, mailboxes, whatever-it’s hard to stop smiling. No matter: this is nothing that isn’t fixed by 6-10 ibuprofen. Bright eyed and bushy tailed by 8 am, come 2 pm and these same locals are collecting at the base, ruined, beers in hand, hoping to get in some rest before whatever the next morning brings to us.

Walk-on trams aren’t helping the situation, although we all know they won’t last long. The word is out, and the holiday is nearly here. But for now, it’s only the ride back up between runs where you can relax… kind of, as you try to lean all your weight on the wall, or your upright skis. You can’t slow down on the mountain, because it is all filled in. And soft. Why would you do that?

Give it another week, and everyone will be strong, and people will have booked their ski vacations, but for now, it’s still pretty special. The sun even came out for a couple hours the other day.

And I think I’m almost out of ibuprofen.