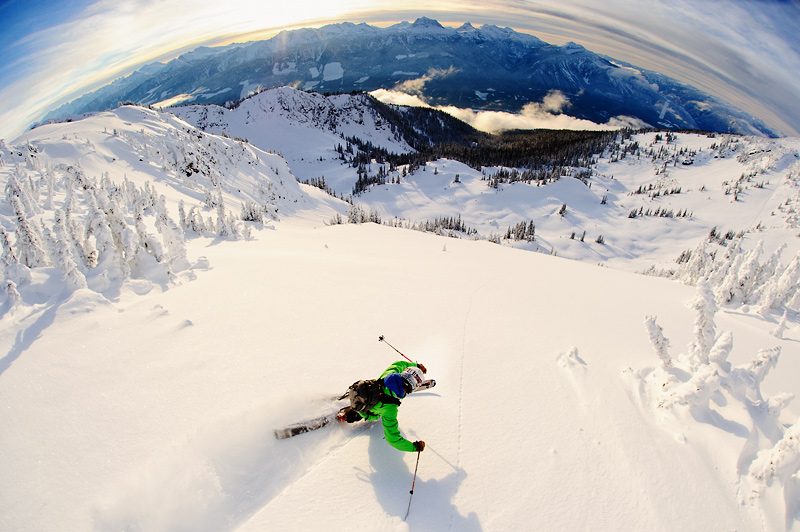 While in the PNW it was raining at a Noah-and-the-flood pace (four inches in 24 hours) the Selkirks were seeing snow, and myself, photographer Garrett Grove (www.garrettgrove.com), and tele-master Paul Kimbrough decided to make the journey from Bellingham, WA, to Revelstoke Mountain Resort, deep in the heart of interior BC.

Garrett and I have some experience with the town of Revelstoke—the past two years we’d been on hut trips out of Roger’s Pass and spent a few days in Revy on our way in and out—but had never been to the newly-established Revelstoke Mountain Resort. The resort, which hangs above the town from the side of Mount MacKenzie and occupies what used to be a small ski hill and old cat skiing terrain, is only four years old and boasts the most vertical in North America and 40 to 60 feet of snow annually. But the most attractive part—though I doubt the owners of RMR would agree—is the ghostly emptiness of the lodges and lift lines.

The town of Revelstoke is a combination of Northern Exposure’s Rosyln and Out Cold’s Bull Mountain, a mix of loggers, railroad workers, cosmic cowboys and ski bums. Giant trucks, beds crammed with equally-giant sleds, fill every other driveway, and blocks of clearcut forest dot the valley wall opposite the resort. Anyone looking for a glossy, comfortable Mammoth/Alta/Aspen-esque experience shouldn’t bother. Anyone looking for a Whistler-esque night life, or any night life at all, shouldn’t bother. Anyone gaming for park jumps or worried about their outerwear getting dirty shouldn’t bother either. Revelstoke is five hours and a gnarly mountain pass away from the closest metropolitan area. It is still a true rough and raw, in-the-middle-of-nowhere mountain town, and despite the resort’s efforts, a rough and raw, in-the-middle-of-nowhere ski hill.

We got into Revy early Monday afternoon and moved our stuff into a cozy, ski-themed bed and breakfast called the Cheeky Beaver (a great place to stay, give Lisa a call at 250.837.5886 for info on reservations) then met up with local snowboard ninja and splitboard ambassador Joey Vosburgh. Joey is known by and knows every resident of Revy by name, and is the most unassuming, hardest-shredding snowboarder I’ve ever had the pleasure of meeting. His franken-snowboard setup, a combination of customized Dynafit ski boots and toe and heel bail bindings (he came up with the system as a better alternative to the traditional splitboard system), is both bizarre, brilliant and possibly revolutionary. Watching him rally his creation disproves any criticism of hard-boot snowboarding and hints at a new era of backcountry snowboard touring.

On Sunday RMR had gotten a good dump and Joey promised us there’d be plenty of fresh inbounds. We were doubtful—as Mt. Baker locals, we’re used to giant numbers of aggro riders and a resort completely tracked out by 9:30—but we trusted Joey so Tuesday morning we loaded the gondola. What we found was 3,000-foot, untracked pillow lines directly under the gondola, unridden alpine turns, and untouched gladed tree skiing. The first two days Joey led us around the resort and the bordering slack-countr. A ten minute hike put us at the top of rock infested, pinner chutes and 45 degree couloirs, and a 15 minute hike above massive bowls and strips of cliffs and spines, all eerily empty. I hate to admit the amazing quality of skiing RMR offers at the risk of hordes of riders overrunning the place, but it’s too ridiculous not to say something. You’ll have to find the really rad stuff on your own though—and good luck with that.

RMR is incredible, but the touring at Roger’s Pass is mind-blowing. Our third day of the trip we got a pre-sunrise start and headed up the pass to meet Joey and some friends, including Christina, a former Olympic downhill skier, Chris Ruebens, the professional big-mountain skier, and Joey’s girlfriend Danyella, one of the National Park’s head avalanche forecasters.The original plan had been to summit Video Peak, but bad visibility had us taking a less-bold route—by less bold, I mean only 6,000 feet of climbing rather than 10,000. Greg Hill, the touring legend on a quest for two million vertical feet of human-powered skiing in one year, was possibly going to show up as well.

The more mellow terrain consisted of waist deep pow, a sacrifice we were all willing to make. Greg did end up skiing with us, or more accurately near us, as his laps were twice as long as ours and he’d easily catch us by the top. He was completely different than I expected—I pictured cross-country tights, sunglasses, and 70 mm-waisted skis with three pin bindings. In reality, he was sporting fluorescent, stylish, and somewhat baggy outerwear with stiff touring boots, Dynafits and fat skis. His first words after catching our group were to call us pansies for not skiing a gnarlier line and to goad us into touring up another 1,000 feet to the top of a nearby knob. At the bottom of our last run, he left us to take another lap or two and faded up into the clouds, stacking more vertical towards his two million (you can follow his progress on his blog, http://greghill.squarespace.com/).

Friday the sun came out, and we spent our day mini-golfing the still mostly-untracked slackcountry on the edges of the resort. I quickly broke myself dropping a cliff to flat, but Garrett, Joey and Paul kept riding, and Garrett came away with some beautiful photos of Joey and Paul riding some equally beautiful lines. With the sun setting, it was time to pack our exhausted selves into Paul’s Subaru. We had one more adventure, however—Joey had made us promise that we’d try poutine, the Canadian guilty pleasure of French fries smothered with gravy and cheese curds, before we left, and after saying goodbye he pointed us towards a burger joint that he said had the best in town. Uncomfortably full and feeling strangely Canadian, we headed south, with a new addiction to French fries, gravy, and the feel of an empty gondola.

All photos are copyrighted by Garrett Grove. Check out more photos on his blog.