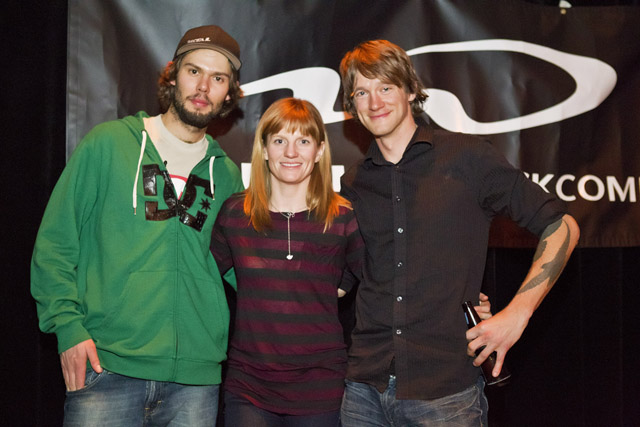 Deep winter can mean many things to many people. In Colorado it could conjure images of below zero temperatures and bluebird skies; out east, blower turns in the trees; and in the Pacific Northwest, deep winter usually means greybird skies, blowing snow and pillows for days. Such was the case at Whistler-Blackcomb this weekend as six photographers had three days to put together a five minute slideshow in pursuit of $6,000 in oversized novelty checks at the Deep Winter Photo Challenge.

Wednesday was all-time; Thursday brought a warming trend; by Friday, athletes and photographers alike were so wet and tired they could have camped in a room full of silica gel and still woken up with soggy boots. But Saturday was show time, and perhaps the greatest feat of all was editing a slideshow in time for the judges—including The Ski Journal’s own Mike Berard—to determine a winner.

By Saturday evening, the show had been sold out for a week, and a standing room crowd packed the auditorium as Andrew Strain took the stage and offered his local perspective through five minutes of falling snow and hidden trees. The snowboard crews of John Scarth and Tim Zimmerman produced the most progressive action of the show, while Ilja Herb displayed some wookie-wierdness in the woods, and Blake Jorgenson proved that he can adapt his signature style and clean aesthetics to any situation. The dark horse of the competition, Whistler-based commercial photographer Robin O’Neill, told perhaps the most interesting story of the whole contest by documenting the lives of two Whistler locals as they worked around the mountain—including some banger action and high explosives.

Despite O’Neill’s strong showing, Jorgenson took home the “King of Deep Winter Crown” and $3k, while O’Neill earned second place and Andrew Strain took third. However, the quality was consistently high through all the shows—all photogs and riders left the venue with a glut of creative shots, having pushed the limits of their gear, their creativity, and their riders through three days of classic PNW storms. And those lucky enough to attend no doubt left town with some classic storm riding in the bag… with their own taste of deep winter on Whistler-Blackcomb.