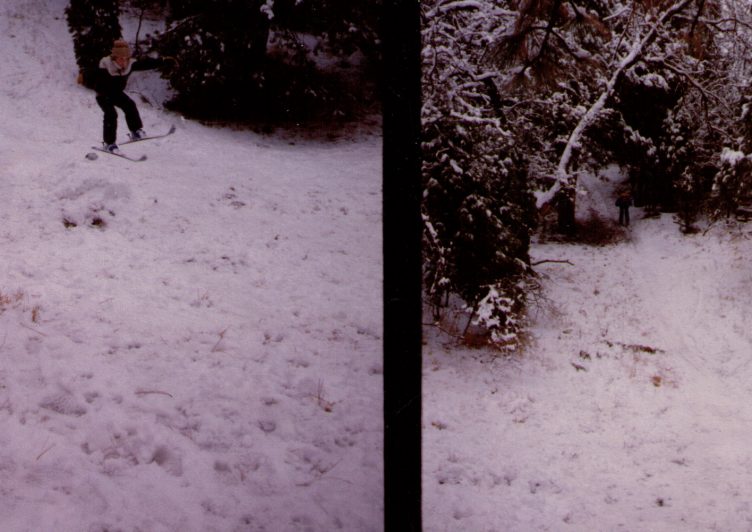 After much deliberating, discussion and delight, The Ski Journal, in conjunction with Warren Miller, is proud to announce the top ten entries for our ‘First Time Ever on Skis’ contest. With hundreds of submissions ranging from 2010 to the 1940’s, from Norway to Dubai to Norcal, featuring tragedy and triumph, family, friends and strangers, uphill and downhill, poems, prose and even a few run-on sentences, suffice to say that theyall brought smiles to our faces—and brought back our own personal memories of the purity of our first time sliding on snow.

Bindings? No one told me I needed bindings until it was too late. And even then, I didn’t believe them.

I was 10 years old when I bought a pair of Hart Gremlins for $5 at a garage sale. I had become infatuated with skiing after years of thumbing through glossy brochures at our local ski shop near Crestline, California. But when I brought my treasured Gremlins home, my mom broke the news: Skis needed bindings, and I needed ski boots, none of which we could afford.

But that didn’t stop me. The first day it snowed (and though I digress, I must point out how painful it is to be obsessed with snow when living in the San Bernardino mountains, which seem to be cursed with attracting 34 degrees and rain, as opposed to snow), I put on my moon boots (this was the early ’80s, after all), wiped the tops of my skis dry and slid down the nearest hilly street layered with hard-packed snow and ice. My first try, I barely balanced on the skis for 5-10 seconds. My second attempt was more successful: I made it down the short pitch in about 15 seconds before I fell on my butt. Problems emerged when I tried to jump over snowplow berms in driveways; I immediately fell off my skis. Same with random chunks of snow lying in the street.

By my fourth “run,” I had graduated to a 75-yard stint without falling. Each time I walked back up the side street, which, fortunately, didn’t see much traffic, I lined up my skis, wiped them dry and carefully balanced, without poles. I’d read how to snowplow in ski magazines and had practiced the wedge on my living room carpet.

It snowed three times that year, and each time, I geared up my moon boots and binding-less skis, eventually progressing to steeper driveways and streets.

The following summer, I won a moped at a record store drawing and sold it to buy — that’s right — skis with bindings, and ski boots. That summer, I raked pine needles into a wide lane, clicked into my new equipment, and practiced making turns down the pine needles. I quickly learned to wear jeans, but even then, the prickly pine needles worked their way up my pants’ legs.

By winter, my parents took pity on me and drove me 35 miles to Snow Valley Ski Area. But before my dad bought me a lift ticket, he told me to walk up and ski down the bunny hill until 3 p.m., and if I still wanted to ski by then, he’d buy me a night ticket. It was 1 p.m., and I walked herringboned up the hill, over and over again. I ignored the strange, quizzical looks I attracted. By the time I had a real lift ticket attached to my jacket, I’d taught myself to stop and turn on real snow. Since then, I’ve revolved my life around skiing.