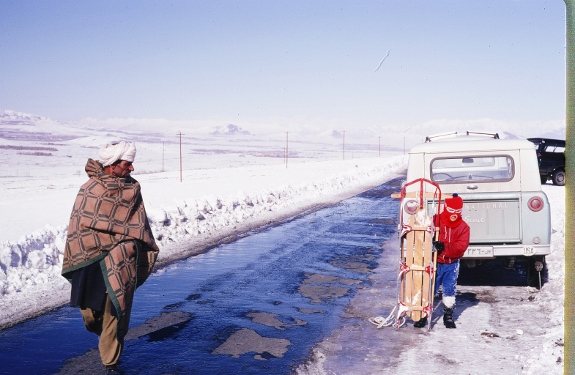 Module: gallery_album
Item: WM3
Displays the photo gallery for a selected Gallery Album.After much deliberating, discussion and delight, The Ski Journal, in conjunction with Warren Miller, is proud to announce the top ten entries for our ‘First Time Ever on Skis’ contest. With hundreds of submissions ranging from 2010 to the 1940’s, from Norway to Dubai to Norcal, featuring tragedy and triumph, family, friends and strangers, uphill and downhill, poems, prose and even a few run-on sentences, suffice to say that they all brought smiles to our faces—and brought back our own personal memories of the purity of our first time sliding on snow.

It was when Daoud and the King ruled the land. The Hindu Kush peaks were snow capped and heavy snow blanketed Kabul. Nothing moved and it was quiet except for the twelve o’clock cannon which fired to let everybody know it was noon. Inside our house, I was bored, ten years old, tormenting my sister, and driving everyone crazy. Earlier my Mother had said, “This year you are going to ski.” I constantly asked, “When?”

Then the equipment showed up, a pair of wooden Kastle skis, cable bindings, poles with leather baskets and lace up Hienke boots. Mom showed me how to put the stuff on, then took me out into the backyard, taught me how shuffle along and do kick turns. “Practice” she said, “Sunday we go to the hill.” All week after school I practiced.

After Sunday Mass at the Italian Legation, we loaded up our square backed Volkswagen station wagon, drove down the Kandahar road into the hills and parked in a row of cars alongside the asphalt. Far up the hillside I could see a hut, engine smoke and people skiing. A boot path was tromped into the snow leading up the hill. Getting out of the car, Mom took my sister in hand, told me to shoulder my skis and started up the path.

The walk seemed to take hours, but was probably 40 minutes. The hut had a deck and people sat on benches drinking tea. The smoke came from a rope tow engine and the hill looked really steep. Mom sat my sister on a bench, introduced me to a German sounding guy and went to drink tea.

The man introduced me to a group of boys. He ensured we could all put on and take off our skis. Then he taught us to side step up the hill and showed us how to make a snowplow turn. We spent the afternoon side stepping farther and farther up the hill and crashing through snowplow turn attempts.

Later Mom told me she and my sister would meet me at the car and headed down. The instructor told the group we were done, next time we would ride the rope tow and not to hit anybody walking down the path. Then he pointed towards the cars and said, “Go.”

We shuffled our way to the path’s first incline, pushed off, gained speed and crashed in mass. Then picked ourselves up and did it again. People walking on the path pointed, cheered or howled. Nearing the road, I lined up a final schuss. Pointing my tips at our car, I leaned forward, gained speed, hung on, crashed through crud on to harder snow, and did a snowplow turn stopping beside the Volkswagen.

Some Afghan hill kids laughed and clapped. Dripping sweat I turned and smiled. Mom said I slept all the way home. It was a happy time, before the Russians and the Taliban ruined the place. Anyway that’s my story and I am sticking to it.