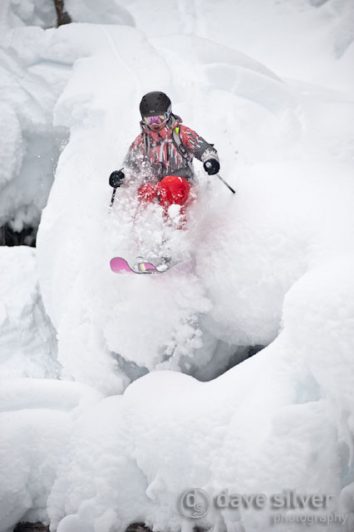 Only two months into our calendar year and it seems that 2011 is the year for social change around the world. What links political justice in the Middle East to the freeski community? Socially-aware skiers with a greater sense of purpose than carving perfect s-turns on far-off powder laden alpine peaks do. This week I was lucky enough to catch up with one such skier: Leah Evans.

With the help of sponsorships from North Face, Rossingol, Red Resort, and Smith Optics, this Rossland native has been competing in freeski competitions since 2006. Her recent successes include championing the 2011 Canadian Freeski Championships in Revelstoke (a Freeski World Tour event), pioneering her own ski travel and filming expedition to Japan, filming all over the world with Ride Guide TV, and winning both the 2010 Canadian Freeski Open and 2010 Rangle the Chute events. What you will quickly learn about Leah, however, is that competitions and filming trips are merely hobbies to support a resume of greater endeavours.

Leah believes that her ski successes have put her in the fortunate position to create effective and lasting change in her community. “As pro skiers, we have a great opportunity to lead change, an opportunity that is frequently ignored.” As a role model in the freeskiing community, Leah’s main community action projects have revolved around further recognition of the female freeski community and the encouragement of young women in freestyle skiing.

Girls Day Out is a project that couples these two goals. As the founding event coordinator, Leah Evans created the first GDO event in 2006, bringing women of all ages and skill levels together for a weekend of skiing. The event aims to encourage and strengthen female skiers so as to motivate women as confident members of the ski community. “I wanted to create an event where people didn’t have an extra stigma attached to their name, just a safe space for women to come together and share their passion for skiing.”

So after being thoroughly wowed and refreshed by Leah’s selfless dedication to something other than jumping out of a helicopter for the best ski photo of the year, the female ski community advocate continues…

“One of the new projects I’ve been working on resembles the popular 1% for the Planet campaign.” Leah is describing her new initiative to donate ten percent of her competition winnings back into female skiing. This could include an injured skier in need of rehabilitation funds, young female skiers in need of gear or travel funds, or any other action project in need of funding for positive results within the parameters of female skiing.

Throughout my chat with Leah, I felt her positive energy had completely worn off on me. The freeski community is thought to be a bunch of ‘takers’. The constant need to consume newer and better gear, the environmental impact of international travel and helicopter access skiing, and the self-revolving lifestyle of needing more and more for your own benefit is probably to blame. Leah is the antithesis to these grumblings. “Because skiing is so self-centered,” she stated “it is easy to be selfish”. To avoid this in herself, Leah says that she wants to open the doors to bring other women into her world and help them know how empowering skiing can be.

I was surprised and humbled to hear Leah state simply “this is something I can so easily do.” If donating 10% of her income and while entrepreneuring multi-day workshops is so easy for her, what is holding the rest of us back from giving back to the communities that we take so much from?

Professional skiers sit in a great position of leadership in their communities. Realising the potential of this leadership role, Leah Evans not only inspires females in freestyle skiing, but sets an example for other skiers on how to give back to society in real, tangible and admirable ways.

To find out more about Girls Day Out or contact Leah with suggested 10% funding projects check out http://www.girlsdoski.com/