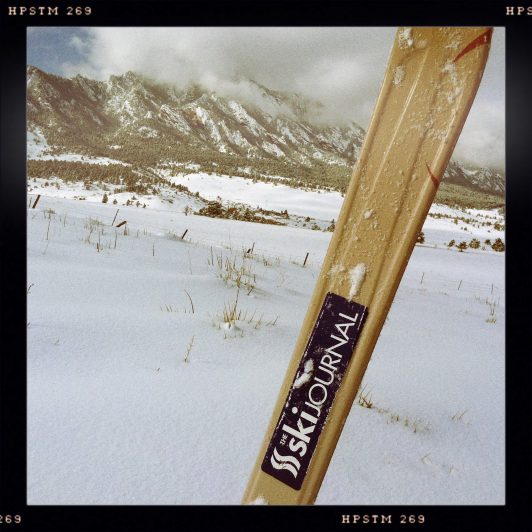 I suppose that at first there was the knee.

Among ailments, frustrations, achilles heels, the sacrosanct knee and associated ligamenture is the keymaster to the fine line between ski season glory and burnout.

But the knee was fixed. Twice. And none the worse for wear, it seems to be holding its own. We have dialogue, the knee and I. Smack talk. And my trump card usually involves ibuprofen and a brace. Call it denial. At least it’s working. And at least the knee has a sense of humor.

This week, it wasn’t the knee at all, but the mystery funk. All that the physician could tell me was what it WASN’T. It probably wasn’t my kidney. Looks promising that it wasn’t an embolism. Heart seems to be fine. None of this was taking away that I was stuck in the emergency room, life’s funny little way of saying “prioritize, Michael.” Smack talk tally: Body, 1. Michael, 0.

And this is fine, considering that I’m not my father. Or is the relentless passing of seasons catching up with even us invincible block heads?

All my friends are getting older

Guess I must be too

So the decree was to “take it easy for awhile.” Easier said than done, since the first real hints of winter are only now at this late hour calling on our square shaped state. Irony? Message from the gods? Life’s lesson? All of that amounts to a pile of crap when faced with significant snowfall.

Because seeing snow drift lightly down from the sky awakens the primeval inside those mountain people who understand that instead of stocking the fridge with beer and milk, we should be rocketing over impossible passes before the Department of Rusty Plows decides to close them. And if you are one of the chosen few to be helplessly “stranded” on the high side of a snow closure, at inter-lodge, by avy blasting, or plain common sense, then we will greet one another with knowing smiles.

The “10 out of 10” on the pain scale, however, is still fresh in the back of my mind. And in the back of my back. Even the ebb and flow of efficacy from my high-powered analgesics let me know that the pilgrimage over the pass would, as my mom matter-of-factly let me know, perpetuate my “burning of the candle at both ends.”

Call it growing up, but the second that I became okay with my body’s victory over my plans, things started looking up.

Be a sailboat, not a rowboat.

The upslope was keeping the snow on the front range. Den Mother Kim brought some homemade soup. And then there is the one calm-inducing revelation that somehow, sometimes manages to be taken for granted.

I chose to live next to a mountain.

It seems trivial, at times selfish, and always just a bit pretentious. But we all make choices. And the breaking of the storm and completion of the igloo in the snow-covered clover field next to the creek behind the house leave but one cure for cabin fever- I can spring from the door of my purple house with skis on my feet. It’s not Jackson. But it ain’t Indianapolis.

So a portal is opened, through which I have again found triumph over the sound advice of my physician and logged some time alone on skis. In snow. Lots of snow. With a view.

We all make choices, and the song lodged in my head guides me safely up the draw towards the pine-strewn mesa and back down through the ditch to the comfort of my own house. On skis. The tracks laid down meant to be a declaration to the world, and a beacon of hope to the neighbors. We all make choices. Where to live, how to live, conflict to avoid, conflict to engage in. And, for those who cannot be fully engaged until their hearts are pumping endorphins mined from the pit of winter’s cold heart, the choice of what to do on a snowy day.

Even when the upslope has stranded us at home.

But is it on this lack of fallen luck

To the Golden Ground?