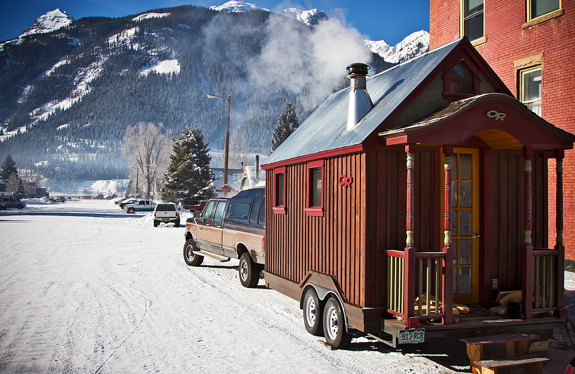 It’s early morning in an empty parking lot. Fresh snow covers the windows. Damp gear and ski boots create that familiar smell of life on the road. There’s no sound of cars driving by or dogs barking in the background – just the silence of a mountain. As groggy, tired bodies rise, exhaustion turns to excitement. There are fresh tracks yet to be made, and soon you’re at the front of the lift line. Suddenly the frigid night spent sleeping in the parking lot pays off.

For so many powder-hungry skiers around the world, life starts and ends at the base of a mountain. For some it involves sleeping in a shabby van, eating canned tuna and constant weather checks. It’s a life with few luxuries, but even fewer complications. Rise, eat, ski, eat, sleep, repeat. If you can get that in the right order, than you’re pretty well equipped for mountain life. For Molly Baker and Zack Giffin, they’ve perfected the technique –they’ve found a way to bring home to the mountains. Working as ambassadors for Outdoor Research (OR), the pair constructed a 112 square foot house on a trailer as their portable base camp on a ski tour across North America this year. They embarked on a safari to the peaks of adventure – replacing the white picket fence with lift lines and transceiver checks.

“We had been introduced to these tiny tumbleweed houses while we were out on Lummi Island (WA), and immediately we both just put two and two together and decided that this is the way that we needed to travel,” Molly says.

Zack has lived out of almost every kind of vehicle throughout the years. For him, it all started out in Volvos and Subarus, and then slowly evolved to pop-up trailers and motor homes. Today, Zack has reached the zenith of ski bum mobiles – a house.

Working as a carpenter during the summer months, Zack had the necessary skills to construct their tiny house just in time to embark on their tour. It was a hectic process – having less than two months to construct everything from the ground up. It started with a flat-bed trailer – just a flat surface on wheels. Before long there came a frame, then walls and windows, a loft, a porch and other amenities. A stove and a fresh coat of paint later, Zack had constructed a quaint home away from home.

“The whole thing was on an incredibly tight time schedule right from the word ‘go,’” Zack explains, “Right away, the one question on our minds was whether we even had enough time to pull it off. The week before we left we weren’t sleeping very much – we were just cranking away on the house. It was just raw and complicated.”

Regardless of the last minute rush, Zack and Molly have been living in what seems like a ski bum’s wet dream this winter. Equipped with a wood stove, a drying rack, seating and plenty of comfortable sleeping arrangements, their portable home has provided them with a cozy, efficient life on and off the mountain.

Yet as lovely as the tiny house has been, the journey has not always been a smooth ride. The tour has been laden with truck problems and other bumps in the road that plague road-bound skiers all the time.

“Our original truck caught on fire, which was actually kind of exciting,” Molly says.

“Things were breaking down almost the entire time. We had glowing molten gas lines all the way to the interior of the engine of the truck. We were so close to having the whole thing totally burn down,” Zack adds.

It’s problems like these that make the pursuit of powder a difficult one; yet, at the same time, it’s what has made their journey so authentic and exciting.

“Hopefully people get a feel for how real everything was,” Zack says. “It’s the same way with anybody who goes on a ski trip – you have a certain amount of money, and you’re trying to make it work, but it’s never enough. Things always cost more than you think, and it’s always harder to get places than you think.”

They’ve been adventuring across North America all season – stopping at some choice locations like Silverton, CO, Jackson Hole, WY, Nelson and Revelstoke, BC, Mt Baker, WA and others. As ambassadors for OR, they’ve documented their journey in the Sidecountry Sessions webisode series, where viewers get a chance to watch them tow their tiny house up and down snowy sidecountry roads in hot pursuit of tomorrow’s powder memories.

As Zack and Molly reflect upon the setbacks of the trip, they mention the idea that true adventure is something that happens only after everything has gone wrong. And after watching Sidecountry Sessions, it’s apparent that these two are true adventurers.

“It was kind of a far-fetched idea that we could actually go and travel around in this house,” Molly says, “But it was just such a great attention-grabbing idea that we had to do it.”

Along the way, they’ve been recruiting new grassroots ambassadors for OR– carefully selecting other powder fanatics to keep the dream alive after they’ve gone to the next distant parking lot.

It’s been a rewarding journey, and this is just the beginning. “The tour is going to happen again next year if everything goes according to plan. We’re going to do it all over again,” Molly says.

The world of skiing and snowboarding is a relentless evolution of taking things to the next level – upgrading every turn with something fresh – like adding another coat of wax to your skis or a more committed line. For Molly and Zack, that meant adding a level of class and sophistication to the usually primitive lifestyle of chasing snow.

“My favorite part about the trip has been finding other people that were like myself five or six years ago,” Zack continues, “And being able to look at those people and give them a bit of a high five. That’s basically what we’ve been doing for OR – it’s like an extended version of a high five.”