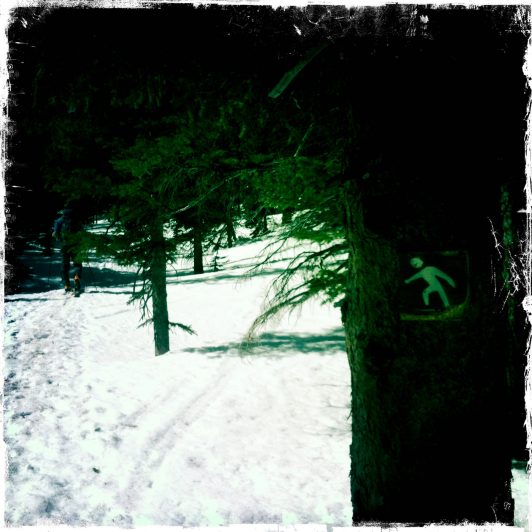 What are we doing here?

On a day when reasonable people are taking in the sweet siren song of the early summer, we are sitting at the East Portal of the Moffat tunnel, at the far end of a valley with no apparent exit. It’s 80 degrees in town today. Even unreasonable people are sitting on decks, cuing up the grill, slathering on crusted sunblock from two seasons prior. And we’re wearing ski pants. Chevalier interrupts my unspoken discomfort and echoes the thoughts that shouldn’t be said, helping to drive home that the prudent play would have been to sleep in and enjoy the day on the front range.

“You as psyched about this as I am?”

The Dread Slog looms. Yet it is the Dread Slog to which we aspire. This will be our final tour before leaving our God-forsaken winter for the Elysian Fields of South Tirol. Somehow the shifty snowpack has been perfect for us in this less than stellar season- when there are no powder stashes to plunder, getting out the touring gear meets less resistance. The upslope has left the eastern aspect of the divide draped in goodness moreso than farther west; it’ll do. The day’s destination was decided by Master Brady. When asked where we should ski, his one world reply was perfect simplicity: “Train.” An early start made the wool socks tolerable; we paralleled the Zephyr line until it disappeared into a Gatsby-era hole in the side of the mountain, only to emerge at the base of an old friend. This East Portal was as far as we could drive- from here, we ski.

As per usual, a setlist was lovingly crafted last night, ideas and memories plundered from old mix CDs that I happened upon while spring cleaning. Part hippie melange, part “train,” our focus would be split between the day’s goal and the drifting dreams of Stelvio National Park and our pending circumnavigation of the Ortler Range in Northern Italy, an area so confused that signage reads in both Italian and German, and imported Tibetan yaks evoke images of European Yeti.

Sometimes I consider my pace, I’m reminded of a train

Gathering speed for the climb to the pass in whose shadow

The ever present ascending rise to the Seventh Mountain

The snow that just a week before had extended past the tunnel and to the parking spot has receded. I note that there is an inherent threshold of tolerability, and we were already pushing our luck. After a series of non-starts, the snow began in earnest. We are strapped in, skins on, gathering speed. Chevalier and Quick-Pic set the pace and I am quick to focus on CSN, the Gran Zebru, and Otzi the Iceman. We verbally acknowledge that the slog will go, and the Wilderness sign welcomes us home. Clack-thwap-glide. Rinse and repeat.

Can you wonder what lies beyond? Though you’ve been

There before and forget about the effort and the strain

Always ascending, each yard as a mile to the never ending pull

Of the steepening grade that’s before you

There exists a very fluid component to skiing that is rarely verbalized. This is not surfing, where the relentless swell lulls the soul in a direct contrast to the encompassing strength of a breaking wave. As with all liquid that verges on a solid state, matter and time slow down relative to the world around. But the snow on which we travel is water in it’s most infant state on the perpetual cycle back to the ocean, and beneath our skins the trickle of summer’s gasp for breath reminds us that this will be the slogging swan song for our high-country ski season. All skiing from now on will be considered summer antics and not proper adventures. The trees are exhaling their pine-scent too sweet to describe, and the memories of countless spring joys echo in our collective dreams. The earlier question of tolerability now seems laughable as we are fully engaged in the ephemeral perfection of a blue bird day in the woods.

There’s a natural mystic blowing through the air –

Can’t keep them down

If you listen carefully now you will hear

There are moments in the hybrid season when we question our motives. But the goal is clear. In two weeks we leave for Italy and recollection of past alpine treks merge with the mystery of anticipation, that most vital ingredient of trip planning. In and out of the garden we go, as a fella once said, and we acknowledge that at this exact moment, our surrounds trump those of any front-ranger. We crest into the alpine and all of its unspoken wonder, the sun usually reserved for summer throngs guiding us above the tree line. Come in! come in!

It’s been a long time that I’m waiting

Been a long time that I’m blown

been a long time that I’ve wandered

Through the people I have known

Oh, if you would and you could

To the restless winter soul, the worst day skiing beats most other days. And today is a good day. Sticky treats are enjoyed as we take in the infinite view afforded by our hard-earned slog. Skins are stripped, smiles are unleashed, and we reap the miles of corn snow that we spent the morning hydroplaning over. Like the snow-melt, we run down down down, towards the ocean, enjoying the ride, more fluid now than solid, states of matter thawing simultaneously for a descent that will serve as the end of our Colorado ski season, and the launching point of the Ortler Circuit in two short weeks.

A valley, a forest, a desert, a stream and an over sized bridge

For the trickle beneath, you remember the torrent

It turned to last spring from the snow melting fast

And the river it became in the summer

As has become the customary apres treat, the three of us descend on Nederland, the “lowland,” and the Black Forest bar for German beer and mulled wine. The Dread Slog is always more memorable in hindsight, as are all exploits in the high country. Gone is the inherent discomfort, and replacing those memories are the day’s glory reflected upon with good friends over a cold lager. A toast to the coming glory, to the day, and good riddance to our beat snowpack and a dry winter; somehow we never remember the dry spells, the dark days. We remember the sunshine. The summit. The smells. The descent. And while we must know a snowless winter to appreciate a powder day, fresh tracks have the power to erase months of frustration in a single S shaped curve, repeated wonderfully, all the way down the side of the mountain.

Then take it as far as you see and beyond

With eyes you don’t use enough to gather up strength

As thoroughfare gap, what awaits is whatever you see

When you get there of even before