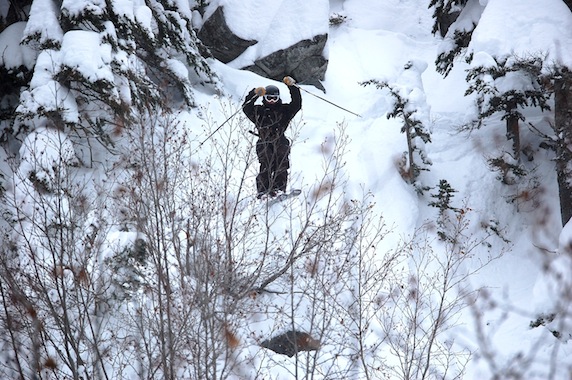 Module: gallery_album
Item: StevensPassDec2012
Displays the photo gallery for a selected Gallery Album.The pain in my legs still lingers. A friend and I headed to Stevens Pass, WA Sunday morning to get some turns, and for me they would be the first of the season. Our hopes were high, but neither he nor I had visited the resort in the past and did not know the terrain. We were worried we could be a day late given reports of Saturday as The Best Day Ever. Mother Nature did not disappoint.

The total accumulation for Stevens Pass is already at fourteen feet—currently the highest total snowfall amount for any resort in the United States. Thirty-nine inches landed Friday night, and more came in as the weekend continued. By the time we arrived Sunday morning, conditions primed the mountain for yet another classic Pacific-Northwest powder day.

We wandered, explored, and experimented. The backside opened the day before, and there, we began our search for fresh tracks. It took a while. Along the way we found some fun cliffs, micro pillows, sideline fresh and even super-tight tree lines—the type we were accustomed to back east, the lines you had to settle with after the resort’s main runs had been tapped out.

And as the snow kept coming down and the afternoon continued, it was finally found: an open, 30-yard stretch of untouched snow, with a decent pitch and hardly any trees. There were no tracks anywhere near it. We stared in wonder. We took turns, our hootin’ and hollerin’ ringing out through the woods, snow spraying up, catching our faces and making us smile. By the time we reached the lift, I could hardly stand up.

To say that we left satisfied, both cathartically and spiritually, would be an understatement. Stevens Pass, we thank you, and we hope to see you again soon—and by that time, my legs will be ready.

Here are some vids from other folks, getting their turns in the Stevens Pass pow.