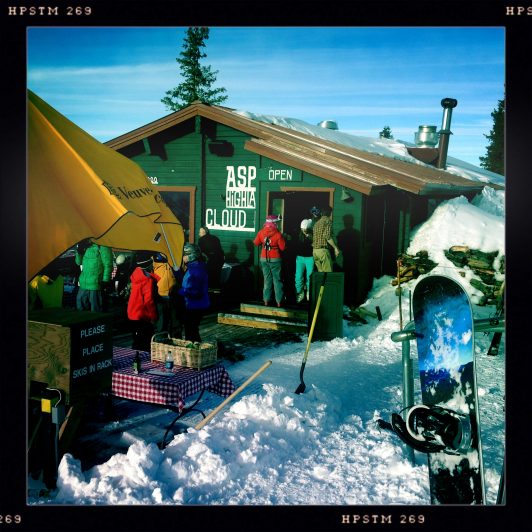 A year ago, a wound was inflicted on American ski culture every bit as traumatic as the loss of an icon or the closing of a ski hill. And while reverberations were likely not felt from coast to coast, the implication and relevance of this wound were indicative of a sport still trying to reconcile its stateside identity in contrast to our European forebears. Of what heinous crime against our sport do I speak?

The Cloud 9 Bistro at Aspen Highlands put a kibosh on fun.

To be fair, chef Andreas Fischbacher maintained the spirit and food quality found in his native Austria’s apres ski brethren. The location remained perfectly perched with a view of the Maroon Bells and Pyramid peak, matriarchs of the West Elks. Timing generally mandated that all patrons had previously enjoyed a day of testing the abundant steeps of the rowdy Aspen Highlands. The ski patrol, however, was tired of escorting over-served diners down the double fall-line groomers to the base.

Before the mandate was brought down, an afternoon at Cloud 9 was the perfect end to your ski day. Start with mulled wine on the deck, unsure as to what mayhem awaited your party inside. Once seated, Raclette and fondue were accentuated by loud club music and diners dancing on their tables. In ski boots. Before long, rounds of schnapps were distributed, and the music’s drone would get louder. And louder. It was a celebration of life, and the beating heart of ski culture. Stewards of the fun from around the world joined in singing, spraying champagne, and reveling in a life well lived. It was, in short, the closest experience in America to the all-night apres-ski pub crawl found at day’s end in St. Anton, Kitzbuhel, Zermatt; the iconic meccas of our sport.

The front room of Cloud 9 is iconic in its demeanor consistent with Highland’s legendary mystique. A large portrait frames the wall of a ski patroller launching himself off of the roof. Towing a toboggan. Bottles of wine line the walls. An instant community is formed, as all patrons are on the same page. Eat, drink, be merry. Dance and carouse. Celebrate life in the cozy embrace of the bistro.

And then, in 2011, the fun stopped. It didn’t matter that the locals screamed and fussed. The staff of Cloud 9 likely experienced an easier afternoon. The ski patrol did not have to babysit, or worse, escort inebriated skiers down in sleds.

It was precisely the shot in the arm that the community needed. The indescribable joy of eating fondue while dancing on your table is not fully appreciated until it is taken away from you. A collective sadness settled over the mountain’s minions. Even the now relaxed staff probably missed the daily debauchery found in their bistro. Take whatever preconceived notions that you may have of Aspen and reconcile them with this one truth: this is a community that at its core is all about the mountains and the culture that surrounds them. They know how to have a good time.

With some community wrangling and a good deal of fuss, Cloud 9 was again given permission to party. With provisions. No more schnapps. Okay, said the masses. Let’s put it to the test.

A recent return visit confirmed again that all was right with the world. After a blitzkrieg of Highland Bowl’s G-Zones, we settled in to the tranquil mellow inherent on Cloud 9’s deck. Flawless views up the Maroon Creek valley are enhanced with the stoke felt by all. After a mulled wine or two, we are given our table. Immediately upon entry it is clear that something is afoot. Several individuals at the first table are clad in shiny wigs as the ladies are dancing on the table. In the far corner, a champagne bottle is uncorked. On all of us. Then another. And another. The smiles on our faces are immeasurable as the beat went on. The DJ kept pushing the volume. Once “Beat It” started, mayhem ensued as not a single soul could remain seated. “Gangnam Style” was met with three more champagne bottles being sprayed, and it was clear that the legend of Cloud 9 was still intact. I pulled aside our server and to ask what had happened, and her reply was perfect.