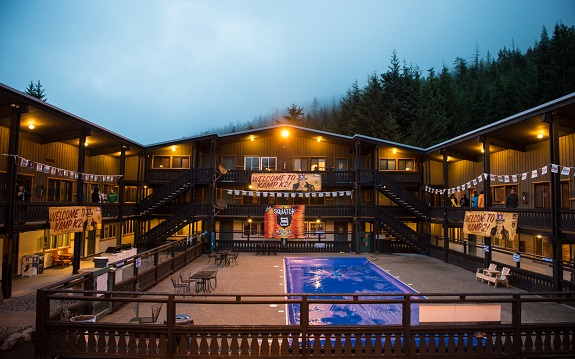 Jeff Mechura, K2 Ski’s head of global marketing, has a strange pair of skis in his office. They’re an old pair of Apache’s, perhaps 85mm at the waist, but running from the front of the binding to the tip of the ski is a metal cable with a latch that tightens the cable and raises the tip—the first pair of rockered skis that Shane McConkey built for K2, to convince their engineers that this was the future. More than the rocker revolution, however, Shane is legendary for his boundless energy, and sporting K2 skis (and occasionally K2 snowblades), he brought positivity everywhere he went. He knew how to have a good time—and he did it on K2 skis.

While I’ve long known K2 as the makers of some great skis, when we arrived at their offices for Kamp K2—an annual event for lucky retailers and contest winners from around the country—I was curious to see if they still had the flame that Shane had imparted upon the company. It started out well; before anything—well, not before drinking a Coors, the main sponsor of the event—we took a tour of the factory, a legendary facility that left everyone impressed.

A second (and third, fourth and fifth) Coors later we were on the road, chatting with the other campers, who had come from as distant a place as Boston and as unlikely a place as Phoenix. Wherever we came from, we were all surprised (and a little bit confused) when we arrived at our rooms at the Crystal Mountain Suites and found them stocked with Jack Links beef jerky, bags of chips, buckets of candy, a freezer full of Hot Pockets—and, of course, a fridge full of more Coors.

Dinner was held at the Bullwheel, the restaurant at the resort’s lodge, after which we returned to the rooms and continued to attack the fridge and finish off a bottle of Fireball (via TSKJ issue at times). The following events included dancing, beer pong, flip cup, socializing and more beer bong. A mountain of cans was soon headbutted, and folks were drinking out of the shell of a K2 ski boot. Things get fuzzy after that, but pretty sure they included an unfortunate amount of beef jerky and Hot Pockets.

Despite the dedicated partying, we were at Crystal to ski, particularly to try out K2’s 2014 ski line. Snow was sparse to non-existent at the lodge—“No Sledding” signs aside—but as we ascended in the fog-and-slush-battered gondola, the PNW sleet turned to snow (albeit wet, heavy snow). We spent the day mashing around in hot pow, fighting spots of sticky snow, boosting over rocks and bushes that had been exposed by the previous week of sun, and in general enjoying a day in the snowy mountains. The skis, despite the marginal conditions, performed well, and we discussed the construction and recent designs (briefly, amongst foggy recollections of the night before) with artist Ryan Schmies and athlete Andy Mahre. K2 is on to something good.

The snow may have been thin on the lower mountain, but the day had us feeling adventurous and we decided to ski as close to the base area as possible, rocks be damned. Stepping lightly and following a local across some sneaker snow paths, we made it within a 20 year walk from the lodge—the funnest run of the day, and a bit of exploration to boot.

The rowdiness of night two began at dinner, with pitchers being handed out with the same frequency and discretion as pints or the accompanying pizza. From there, folks moved back to the tent or headed to The Snorting Elk, the local Gaston-worthy bar, for darker beers and some deep breaths. But the music from outside was obvious, and after a moment of recharing the tent was calling.

DJ Mullet—an infamous Seattle MC, whose hair was only matched by his road-cone-orange limo—provided the entertainment for the night. Beer pong tournaments ensued, as well as dancing and the inevitable, spontaneous karaoke session. Cans had been replaced by kegs, and once the fourth was drained the party moved back to the hotel—partly because there was more beer in the rooms, partly because there were more Hot Pockets in the rooms.

The next morning was rough for many of the campers, and many were saved from their hangovers by Que tu K2, the taco truck that provides Mexican food at the base area. The snow up high proved to be even stickier than the day before, but many brave campers headed up anyway—snow is snow, whatever the consistency, and folks were eager to continue testing what was proving to be great gear.

The next morning, the campers returned to the K2 factory and the Seattle Airport—some moving a little slowly but stoked on what had turned out to be for most a great weekend—bound for their respective homes around the country. Poor snow aside—or perhaps because of it—the demos proved that K2 still knows how to make a damn good ski; the fun of the weekend proved that K2 also still knows how to have a damn good time. Shane would be proud.

A special thanks to K2 Skis, Crystal Mountain Resort, Coors and the many other sponsors who were responsible for putting on a great event.