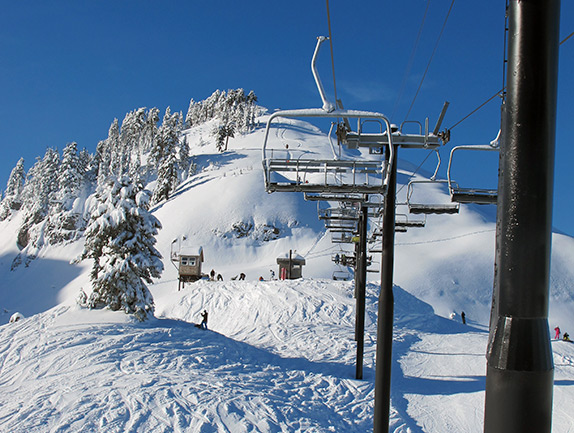 After 10 years and 10 opening days at Mt. Baker, I’ve seen most every flavor of season opener imaginable. One with barely enough snow to cover grass, one icy enough to make an east coast hill proud, and two as epic as any mid-season pow day…hell, one even with 90 inches, 12 of those fluffy pow. With the kickoff of Mt. Baker Ski Resort’s season each year, I’ve realized that–in the words of Forest Gump–you never know what you’re gonna get.

For the 2013 season, that flavor was “interesting,” and mostly the word’s good connotations. The blue sky suggested May slush, the coverage suggested protection from most rocks, and the surfy pow up high off of Chair 5 and 8 suggested a pow day. The groomers looked a bit hard, and the snow down low lacked the shimmery glow of Hemisphers and the Arm, but still looked fun. It was also as close to a “Choose Your Own Adventure” book as I’ve ever found at a ski hill.

This, however, is where I unfortunately step out of the narrative. The soft, legit pow at the top of Chair 5 and my inadequately prepared legs lulled me into a state of laziness, and third run in I caught a tip on the edge of a groomer and found myself sprawled out with a Class 2 shoulder separation. Thus, the next few weeks of my season ended on the day they also began. Stupid groomers…who needs em?

The rest was gathered secondhand during my sunny, lodge-bound, beer-drinking self-medication session, but it turned out the choices were as true to form as the conditions suggested. The groomers were firm, but continued to soften (and, with 45-plus degree days in the forecast, will continue to do so), and the brave souls that made the hike up Hemispheres or out Shuksan Arm were treated to some respectable pow for the upper parts of their runs.

Meanwhile, my friends who chose to remain on the groomers for the rest of the day found side-hits, poppy rollers and surprisingly good coverage. While venturing off into Gabl’s or Sticky trees was a journey fraught with peril–it is still early season after all, and impressive for mid-November–good times and good conditions were only a short ride or groomer lap away.

Whether you go with groomers or Arm laps or shoulder separations, it’s always the cast of winter characters that makes opening day so memorable. The friends you spend half the year with and then part ways, only to return with the same united passion come mid-November the next year. It’s a shared excitement, whether you’re buzzed with a buggered shoulder or already hiking for pow turns.

And, above all, we’re on skis again. The season (and winter) has started. And whatever the flavor of chocolate may be, it’s still chocolate. Whatever the conditions are, we’re still skiing. And that’s what matters.

A huge thanks from the TSKJ crew to the Howats, the Mt. Baker offices, the patrollers and med shack heroes, the lifties and lodge employees, the road crew and everyone who makes the magic happen. Here’s to a long, deep and healthy 2013-14 season.