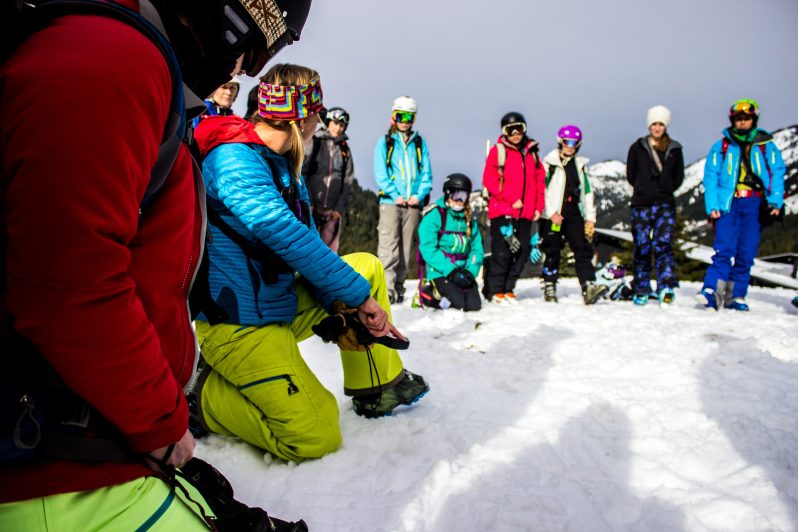 An avalanche has just struck you and your group of friends, a short jaunt outside of the local ski area but far enough away for quick help. While the slide took a number of your group for a ride, one is still missing, and there is no sign in sight. Panic sets in. Action must be taken—the right action. Your friend’s life depends upon it

While no one wants to make these decisions, having the correct knowledge is necessary for making the right ones. It is this reason that on Saturday, December 14th, professional skiers Jackie Paaso, Michelle Parker, Elyse Saugstad, Ingrid Backstrom and mountain-guide Lel Tone took to the slopes of Crystal Mountain Resort to educate a group of ladies in their S.A.F.E. A.S. (Skiers Advocating and Fostering Education for Avalanche and Snow Safety) clinic. The intro to backcountry basics course is a good time; more than that though, it is another step towards a culture of avalanche awareness.

Beginning in the season of 2012- 2013, S.A.F.E. A.S. was originally an exclusively Squaw Valley, CA event. “When we originally started S.A.F.E A.S., Elyse, Michelle, Sherry and I were talking at a coffee shop after a yoga class,” says Paaso. “It was autumn, after Elyse’s incident, and we got on the topic of having a women’s ‘intro to avalanche‘ class and integrate yoga into the curriculum. We asked Ingrid if she wanted to take part, and we already knew we wanted Lel to help as well.”

The clinic was a success, so much so that the crew decided to expand S.A.F.E. A.S. from an exclusively Squaw Valley event to five other mountains—including Crystal, Ingrid’s home mountain.

Intended for intermediate to expert skiers interested in moving (safely) into the backcountry, a day in the S.A.F.E. A.S. clinic is an in-depth experience: after a yoga session in the morning, clinic-ees are led through a classroom session, where Lel, Michelle and Elyse share their own avalanche experiences, including Elyse describing the Tunnel Creek incident at Stevens Pass, WA in 2012. Then it’s lunch before heading outside for on-hill training.

Learning that survival rates drop off steeply after only 15 minutes adds a sense of emergency to the individual and group beacon searches clinic-ees are put through for the second half of the day—especially relevant with the current PNW snowpack. As Kim Kircher, a long-time Crystal pro patroller, informed us, there are many instabilities and uncertainties in the backcountry around the Northwest. This only adds more urgency to the searches, even if they’re staged.

“Seeing that woman are going to get out there in the backcountry and be safe about it is really cool,” says Backstrom. While classroom education is important, hands-on experience like the S.A.F.E A.S. clinics play a vital role as well. “There needs to be more of a culture in snow safety. Making it well known that you can’t just duck a rope and go out of bounds and expect the slope to be safe is very important for everybody to know. For example with surfing, it’s widely known you wouldn’t just paddle out into shark infested waters—it needs to be the same with avalanche knowledge.

Despite some confusion during the five-person group search, our search group successfully locates the buried beacon in less then the 15-minute window, theoretically saving our “friend.” Still, an exercise and the real thing are very different, and afterwards we reflect on things that could have gone smoother and ways to improve for next time. With the debrief completed and minds packed with new knowledge, the day ended with a raffle at Crystal’s summit (the shuffling of which, I suspect, was not the most thorough), which included gear from Mountain Hardwear, Eddie Bauer, Marker, Scott, Anon, The North Face, among others.

“We learned a ton from the ladies today and the whole idea of not rushing and training for success really stuck,” said student Cathrine Steitzer. With ambitions to keep the program running next winter, the ladies are looking to expand S.A.F.E. A.S. to other ski areas next season—whether it’s California or the Northwest or the East Coast, avalanche education is something that is vital for backcountry skiers everywhere.

With the day done and the lifts coming to a stop, Ingrid shared some final advice: “What’s important at the end of the day is to be able to do it the next day.”