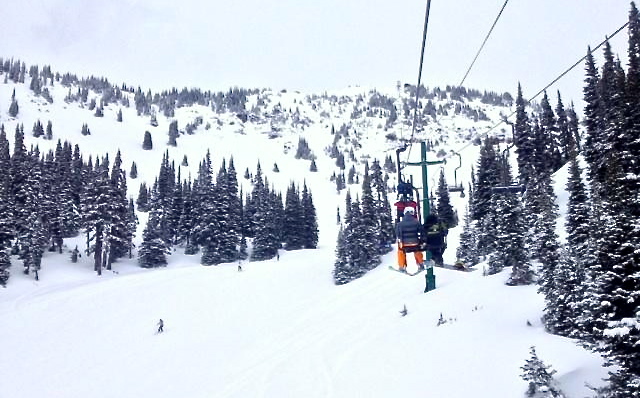 Winter has officially begun in the Pacific Northwest–or at least returned. With Crystal Mountain receiving roughly 8” at the summit, everyone is finally able to quit their quasi-summer recreating and get back to shredding.

With a solid base of 54” at the summit and 17” at the base, we now have fresh snow to ski and it feels oh-so-good. Much like Christmas – a few weeks late.

People were lined up as early as 8 a.m. for first gondola. I personally got in line at 8:30, earning third gondola and fresh tracks, my first powder day of the season. Then the wait at Chair 6 to open…

Standing in line, everyone was full of energy, yelling and moving around. Once they stepped into their skis and boards, all that energy surged down the mountain – throwing rooster tails and entering the white room.

Fresh snow could be found around the mountain all day, especially for those willing to hike. Southback was not open, but Chair 6 was, allowing skiers and snowboarders to access some steeper powder. I personally earned some fresh tracks by splitting up to Silver Basin in the afternoon to some lower angled terrain – higher terrain seamed to have some stability issues.

The forecast is looking good in Crystal Mountains favor for the weekend, so come get it while the getting is good. See you up here.