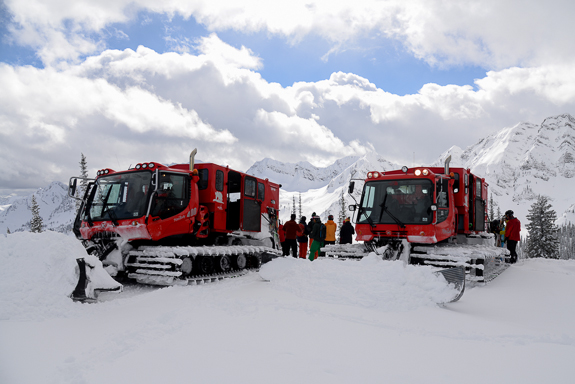 Module: gallery_album
Item: TSKJWEEK2014
Displays the photo gallery for a selected Gallery Album.Talent, knowledge and personality are all factors in making a great guide, and weather and conditions are obvious factors in making a great cat skiing trip. But during The Ski Journal Week 2014 at Island Lake Catskiing in Fernie, BC, lead guide “Big” Steve Kloepzig showed us there is another, less obvious element: the pre-drop-in sign off.

“We’re going to traverse right for some more untracked,” Steve said nonchalantly, as he turned to start the in-track to another of run of blower pow through perfectly gladed trees. “We’re also going to be under some serious cornices and sketchy avy terrain, so it may not be the best time to show the little man the big world.”

It was just one of the many comments he’d leave our group with before dropping in, the casual delivery adding to the effect. Others would include, “I’ll be on the road somewhere–have fun,” “Everything should be good…just watch out for the giant hole”–and all heralded some of the best turns of the season.

Just a few days before heading northward towards Fernie, the fate of the trip was dubious–the area had been hit by rain, extremely rare for a place known for massive dumps. But, in typical Fernie style, the worries were for naught–Mother Nature made up for the warm precip over the weekend, with the lodge receiving over 100-plus cms in just a few days prior to our arrival. As the crew rolled into the parking lot on March 20 for the cat pickup, the snow was knee deep.

With such tantalizing beginnings, hopes and excitement was high as the top-of-the-line cat clattered towards the lodge, and the next four days did not disappoint. Arriving at the four beautiful, cozy log buildings that make up Island Lake, the view of massive peaks and bowls rising directly from the lodge was the first pleasant surprise; after unloading our gear and sitting down for dinner, the atmosphere (and flavors) of the lodge itself was an impressive second.

Island Lake is a unique operation with a unique history. The operation sits on over 7,000 acres of private land, with a government tenure adding a few thousand more, a situation that came about due to the pooled resources of trusting investors in 1995 who bought the land from Shell Canada. That list included such legendary names as photographer Mark Gallup, Scot Schmidt and snowboarder Craig Kelly. An image of Scot Schmidt airing over a gnarled snag is probably the most famous–it ended up as the cover of the 1994 film P-Tex, Lies and Duct Tape.

The private land also allows for another bonus. A falling crew (with the aptly nickname “Big Steve,” who looks every inch the burly BC logger, being one of the head cutters) spends most of their summers glading new runs to create tree skiing to rival any resort in Utah or BC, for that matter–except with more pow and no tracks. Knowing each specific tree and turn personally, Steve took full advantage of that glading, leading us on run after over-the-dome run down areas like “Domestic Dispute,” “Spartacus Biggest-Dicatus,” “Snowboard Hell” (which still blew the minds of the snowboarders in our group, despite the name), “Breathless” and “Beer Gut.” Tail guide Kelty Mckenzie proved her sign-off potential as well, leading us on a few great runs herself. Day one ended with uncontrollable claims of “deepest day of the year” and apres beers at the cat, followed by a hot tub session and another absurdly delicious dinner. Before heading to bed we rallied ping pong tournaments and consumed beers in the lodge’s impressive ski museum. We made many a “most epic day ever claims” between games as well. By the end, we couldn’t decide which of the four days we were referring to.

Day two and three followed in similar snow-drowned blurs, with photos and GoPro footage of faceshots being so commonplace that media devices stayed in the cat in deference to straight soul turns. A few backflips, pow butters and big airs punctuated the fury, and the sun peeked through in the afternoons to create an even more surreal experience. While many cat trips include a lot of hard partying, between the over-the-top meals and fire-side beers, even espresso shots couldn’t motivate us to earn hangovers. There was too much pow to ski.

Sun broke through on the afternoon of the third day, and the lodge called in a heli for some high-alpine control work. With stability looking great, we headed into the alpine on the last day for the kind of wide-open sunny pow turns typical of heli ops, and by the end of the day we had tracked out an entire massive alpine bowl ourselves—the kind of experience few skiers will see in a lifetime. Steve and Kelty were equally as stoked, and allowed us two encore runs. Loading up the cats for the journey home, I don’t know whose smiles were bigger, ours or theirs. Either way, Steve and Kelty proved themselves masters of the sign off…although with what Island Lake has to offer, that wasn’t too hard to do.

The skiing and lodge experience may be the general highlight of The Ski Journal Week, but for me as editor there’s an even more authentic aspect. Each year we bring along a subscriber, chosen at random from our list of snow junkies, and each year that subscriber has been not only a ripping skier, but a kickass and generally awesome human being. This year’s Big Winner–Spokane, WA native Kyle Lucas–was no exception, shredding pow and lines each day and adding a positivity and passion (as well as some impressive ping pong skills). Here at the TSKJ offices we know our subscribers are the best out there; shredding alongside them in person is just another inspiring confirmation. The 2015 TSKJ Week is now only 362 days away, so subscribe today for your chance to be the “Big Winner”—it will be a good time, guaranteed.

Here’s to another great year. Or as Steve would say, “It should all be epic. See ya at the bottom.”

A special thanks to Doug Feely, Mike McPhee, Steve, Kelty, and all the staff and guides at Island Lake Catskiing for making this trip a memorable one, to all who attended, and to Big Winner for showing us why we do what we do.