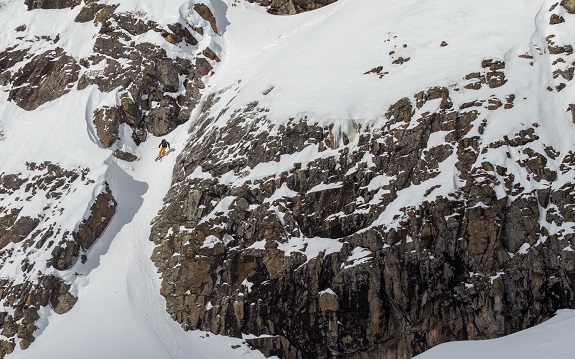 Despite the half-mile walk along its icy bank, the Boiling River is deserving of its name. Clouds of steam billow ahead, marking where the hot spring’s 100-plus degree waters crash into the larger Gardner River, just a short distance from the north entrance of Wyoming’s Yellowstone National Park. The high-pitched growl of snowmobiles are as present as the steam as we sink our tired bodies into the river’s scalding depths. It’s a glorious moment, but the “Braaaaap!” in the distance is a constant reminder that we’re recovering from pow-filled failure.

Snow totals have been meager across the nation, so in search of the elusive storms that have been so lacking myself and Olin Wimdberg have made the journey to Cooke City, MT, also known as the snowmobile capital of the US. On the larger ski scene Cooke City is a mecca; in reality it’s in the boonies, remote to say the least.

This became quickly apparent as we made our way east from Bozeman, MT, the nearest town of any significance, just under a week ago. Winding up the Beartooth Highway and through Yellowstone, the most noticeable signs of civilization quickly became the sled-burdened trucks filling the highway. We’re one of that demographic, although we also have a homemade, hippy-esque truck-bed camper as lodging as well.

The further west we drove the more mountainous and rugged the landscape became, 10,000-foot peaks rising from the valley around us. By the time we get to Cooke City, we are out of cell service and are three hours away from the nearest hospital—not a comforting thought, but the “SKIERS ON ROADWAY” signs we pass keep our excitement high. There is big skiing ahead, Montana style.

The frontier-level feel of the journey only increases as we pull into town. The three streets consist of almost as many saloons, and the flesh-and-blood horses of yester-year have been replaced by the motorized kind, Ski-Doos, Arctic Cats, Polaris and Yamahas. Two gas stations, two sled shops and a handful of eateries and motels replace the mercantile stores and farm and seed markets, and most people park their trucks when they arrive and don’t touch them until they leave. The abundance of testosterone and rowdiness remains. In Cooke City, the West has yet to be won.

We met the rest of the crew, including Essex Prescott, Jared Schneider and Corey, early the next morning, at a greasy spoon diner along main street. It was snowing hard, and the goal was to explore the Miller Creek area, a zone offering both the chance of high-alpine shredding if the storm happened to clear and mini-golf lines in the trees if it didn’t. We felt the latter was the most likely, and when we arrived in Miller Creek we were right. Still, there were plenty of cliffs and tree skiing to keep us busy. And that’s when the problems began.

There is an important distinction to make at this point: sled skiers are a different breed than slednecks. Slednecks ride their snowmachines for that singular purpose. Sled skiers ride theirs to ski, and only the ambitious can rise to the level of the true sled head. Essex would thoroughly prove this point when he tried to get to his line via a hill climb through a chute. About halfway up he decided to turn around, but as he turned downhill he got bucked and sent the sled directly into a tree—actually a good thing, as it stopped the machine from taking a deeper, more destructive line farther down the slope.

The problems continued with the storm. Later that day, Olin and myself were tandeming sidehill towards the top of a face on my sled, but had failed to take into account the weight difference between us: Olin is 60 pounds heavier than me, and in our naivety (or bad luck) he happened to be on the downhill rail. About halfway up, the machine started to dip to the left, and despite our desperate efforts to counteract the inevitable it was soon steamroller-ing towards a patch of trees below. In another spat of relative luck, the only damage was a bent sled-ski, which Essex was able to straighten by pulling and standing on it.

The next day we headed back out, this time towards an area called Round Lake that Essex had suggested. We hoped the change of date would bring a similar change of luck, but Murphy decided his Law would continue to be in full effect. It was just myself and Olin on this outing, and we soon found a knob ringed with a cliff band of 10 to 30 foot senders. Olin, always ambitious, pointed it from the top of the knob towards one of the bigger drops, attempting to gap to a distant transition…and came up short, smashing his face into his knees. He got up and brushed the crash off, but it was obvious he was a little woozy and we decided to take the rest of the day easy and do some more exploring. Olin’s new camper was a welcome haven by the end of the day, as were the snacks of cereal and granola bars. That is, until Olin suddenly turned a ghastly white. “Damn,” he said, swaying a little. “I don’t feel very good.”

His diagnosis quickly matched his appearance, to the point that I ran into town and grabbed the local EMT (the lack of hospital, I realized, could easily turn into something much more dire than an inconvenience). The EMTs put him on oxygen, and determined that his knee-to-face wasn’t hadn’t just dazed him—it’d given him a minor concussion. Score one for cliff, zero for Olin.

Still, we had driven all this way in search of snow, and with the rest of the continent still starving we were determined to make it worth the trip. The next morning brought an even heavier storm, and we headed out in search of some less-consequential lines. Unfortunately, painful consequences can appear in mechanical form as well, as we had thoroughly found out during the previous days of the trip…and that continued to find out when Olin’s sled starts smoking before completely seizing up. He had installed a new motor shortly before we arrived, and apparently some of the parts were faulty. For the second time this season, his engine was totaled. We hitched it to the back of mine, and towed it back to the truck, once again defeated by this vestige of the Wild West.

As most of the area’s miners had found over a century ago, the promise of riches is almost always cheaper than the actual search. Most of those ambitious gold-seekers had learned that lesson at the cost of their entire savings and years of hard labor; our price had been a concussion and a burnt up sled—expensive, but better than bankruptcy and homelessness. For those seeking riches of the snowy kind, Cooke City has the potential to be a motherlode of untracked, powdery goodness. For us, it was time to cut our losses, and we packed up and decided on our current reprieve in the Boiling River.

Resting in the swirling hot-cold waters, we discuss our failures and all that we have learned, most prominent among the conversation being the zones we were unable to ski and those we’d tick off next year. While it may be foolish, just like the miners of old we’re determined that next time we’ll find our fortune and this time. Next time, at least for us personally, the Wild West will finally be won.