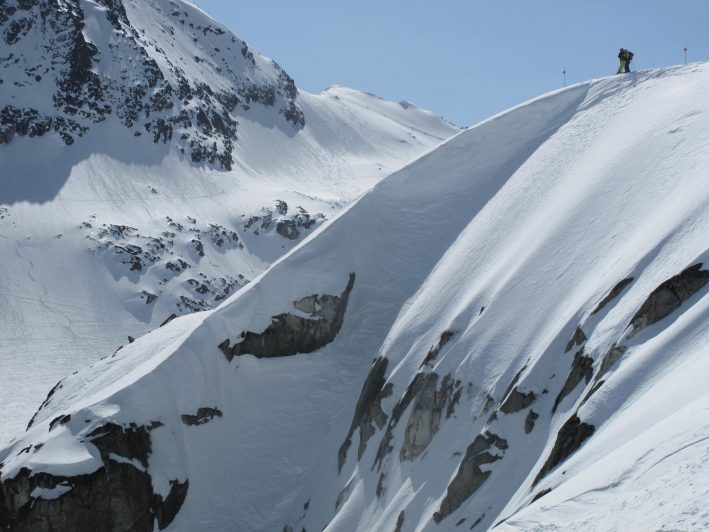 The knock came early and before my wingman, Rene Crawshaw, was back from The Village with our coffees. I was reclining on the brown and orange couch cushions inside his meticulously refurbished 1986 Slumber Queen slide-in camper, trying hard to look inconspicuous in Whistler/Blackcomb’s outer, and still free, parking lot.

I’ll admit it—I was still a bit wrecked from the Olympus Pro Photo Showdown and Local’s Night encore at Garf’s that ended either really late or really early a few hours before. But official interaction was headed my way. So I swung open the door to bright April sunshine and a polite greeting from a Whistler Municipality bylaw official in an embroidered blue fleece.

“Oh yeah, just waiting for my buddy to come back with coffee.”

“Right, you can hang out in the camper of course, but there is no sleeping in your vehicles.”

“For sure, thanks for letting us know.”

Every ski hill has a spring festival or a blowout extravaganza, but few compare to the music, action and cultural extravaganza that is the Whistler’s World Ski and Snowboard Festival. Even at the 20-year mark, the two-week celebration still draws massive crowds, national music acts, a steady stream of nightly cultural events, and top-tier huckers such as Bobby Brown and Mark McMorris. It’s possibly the winter’s most extravagant sign-off.

As a semi-retired ski journalist, I’ve landed at the WSSF before, but with a decidedly more privileged, or entitled, media pass. The last time I was here, I accepted free lodging in the luxury Olympic PR house, complimentary five-star meals at world-famous, five-star Araxi (seafood tower and champagne saberage included), VIP tickets to events such as the Filmmaker 72-Hour Showdown, free-drink SBC wristbands at the Longhorn and free unlimited vodka at a Blake Jorgenson/Asymbol afterparty for the ages. Don’t get me wrong, it was sick, and I never once had to pay for parking.

This year, however, I was mostly on the other side of the velvet rope, directly inserted into the crafty populism of the weekend refugee camps lurking under the municipal radar on the margins of the blacktop. It was a different class of existence, yet still a very comfortable way to roll. And we still hoped to make the VIP parties, sponsor zones and marquee events. Who says dirt bag can’t be luxury?

We were not alone in the outer parking lot, and over the next four days would be “not officially” camping with a random itinerant collection of other RVs, 5th Wheels, Delicas, slide-ins, retrofitted minivans and late-model pop-tops of spring-season refuges who had migrated to Whistler for the slush skiing and the afterparty, long after their home hills stopped spinning chairs.

To be honest, a few days removed, it’s all a bit of a blur. I’m sure you can find a better recap of who won what comp or what band slayed the mainstage, but I made a few notes. So what follows is the blurry mental journal of a grassroots correspondent. You’ll have to trust in my recollection, unless you were there and have your own festival tales to tell.

Start late due to an accident on the Second Narrows Bridge that delays the Slumber Queen for three hours. Tuesday’s powder day softens perfectly into Thursday corn for a crack-of-noon start. We ski enough lines on Blackcomb via Spanky’s Ladder into Diamond Bowl and after a Peak-to-Peak diversion to legitimately call our stop at the GLC deck après and not just day drinking.

We head back to the lot, where we encounter two German freeride tourists in a limping AstroVan looking for a transmission repair shop and a spot to sleep. An extra ticket for the Olympus Pro Photo Showdown draws friend, photographer and Mt. Currie Coffee owner Chris Ankeny south from Pemberton for the marquee event of the show. At the conference centre, we three alternate between viewing local mountain art, steering clear of the free coconut-flavored vodka and figuratively crowd surfing the deep local throng.

Lorenz Holder wins the $10k prize, deservedly, and there is much rejoicing. We land in the middle of Whistler nightlife madness as a local’s lingerie show meets reality TV show at the GLC. Downstairs at Garf’s a few hours later, with a crew of SBC Skier folks and a charging, Extremely Canadian AMGA guide, I wonder if it was maybe a little too much rejoicing.

Late start with touring gear but we make it out the Blackcomb glacier gate in smoking hot weather. I rehydrate vigorously. We skin up, down and up to Disease Ridge—albeit slowly—where Rene drops a sharky, teeth-rattling refrozen line into brutal rubble on the infamously steep face. I meet a Canadian Olympian in the bootpack. After watching two more jaw-chattering lines, I decide to rip the ridge.

Back in-bounds we meet a friendly Earl’s hostess on the Seventh Heaven return, before checking out the massive Seventh Heaven kicker—a structure built for a famous pro shred to complete a first-ever quad-something. We slide over to the Monster Shredshow Border Style, a mix of speed, cross and style, in search of the VIP/Media zone. Instead, we watch pros race four to a heat, hucking and elbowing for glory over icy water hazards and a final kicker that requires a mandatory mid-race rotation.

De-booting back at the camper we kick off tailgating with John, Chris and Dave from Bellingham. They brought supplies. We partake in their backcountry shot-ski set-up. The secret formula: half Kraken rum, half Red Bull. The chant: One ski, two skis, three skis, shot ski. It tastes much smoother than anticipated.

Cold Rainer, JetBoiled Ramen and fresh socks. Our tailgate party draws a crowd. The local Reef rep—a Tsawwassen, BC friend—rolls in with free calendars, spare shades and his family. Two skaters with a rented CanaDream RV amble up and ask if it’s cool to camp here (yes).

Turns out one of them is Desi Sherwood, a YouTube sensation who won Alyeska’s Slush Cup pond-skimming contest with a backflip to stuck water landing. His buddy finished second, and they picked an RV trip to Whistler as their prize package. As the sun sets, we attract two Fernie locals who ask if it’s cool to camp in the lot (yes) and wonder where they can shower (the Whistler Rec Centre). We crank the first period of the Vancouver Canucks game on the truck radio.

In the Village we skip the Intersection event ($35?!) and watch periods two and three of the Canucks playoff game in the SRO atmosphere of Tapley’s sports bar. There is a bachelorette party passing around a giant inflatable phallus. Behind me, at the bar, two aging Canadian rockers in leather jackets argue over whether Bachman-Turner Overdrive ever played the Super Bowl. Or was it the Grey Cup? Either way it was a pivotal event in their lives, they conclude.

We bump into Lynsey Dyer at the Amsterdam, where she describes the experience of shooting a reality television show in Whistler this spring. I think there was pizza afterward. We end the night downstairs at Garf’s, unfortunately, again.

We meet Rene’s former ski partner Chris Kelly, a successful dentist from Squamish, in the parking lot. On the hill we follow Chris and his buddy, who are both charging like extremos on a responsible adult time clock. They rip.

For some reason (maybe it has to do with Garf’s) Rene and I fail to effectively navigate the Horstman t-bar and I bowling-ball down the headwall through polite Canadian skiers. We reboot and drop into the Blackcomb Glacier, Blow Hole to be exact, following the locals to the Pencil Chute, a 50-ish north facing gnar chute that still holds shaded snow. Rene follows their sketchy line. We take two more laps, one bulletproof moguls, one perfect corn.

The locals head to their families in Squamish and we exit for the Monster Shredshow Slopestyle, where we slide into the sponsor area in time to watch Canadian Olympic medalist Mark McMorris win the event with a triple cork. We linger for the free food and beverages, running into Elyse Saugstad who is posted up in town for a few weeks. I wonder why she is not filming in Alaska. Then we download.

We attempt to grab $3 showers at the Whistler Rec Center, but are shut down by a hockey tournament or a swim meet, I’m still not sure which. I really needed that shower.

Back in the Village, we post up on the GLC deck and hover over the Shredshow Freestyle Motocross Exhibition, both moto one and moto two. Bikes flip, tricks are thrown and the crowd goes wild.

YelaWolf, the headline act, never makes it to Canada. So we poach our way onto the private Monster deck party then Jedi mind-trick into the Monster VIP Party at old-school hip hop night. The Monster girls are there. We have a confirmed Treadway sighting. Three DJs—J Rocc, DJ Illo, DJ Vinyl Ritchie—crank Easy E, early Beastie Boys, Snoop Dogg. They even play Tribe Called Quest. Ladies dance on the tables; the sound is booming and infectious. The crowd packs the dance floor. The bar is literally shaking with the bass. It was the best party I’ve hit in years. Over a week later, my ears are still ringing.

We’re both worked, but its bluebird again on Blackcomb’s closing day. So we go ski. Security checks our backcountry packs for alcohol on the upload. We see what we’re pretty sure is Sasquatch. Then we rip the fastest frozen groomers of the season while the rest of the town is still asleep. The hill is still a ghost town at noon. I redeem myself on the t-bar with a successful unload. Lap after lap, we ski like it’s all melting away.

We log something like 20,000 feet of vertical on perfect groomers before lunch. Rene has a Bode Miller hip-check moment at Super G speed. He pulls it without catastrophe but it’s his fourth near-carnage ski moment in four days.

We take a breather, then download before the final junk show explodes. It’s 70 degrees (or 20 Celsius, depending on your nationality) in Whistler Village. The barefoot hippies are protesting Big Oil and hula-hooping in Rebagliatti Park. We walk triumphantly back to our flip-flops. Metal stairs down, boots off, beer open…we claim victory at the Slumber Queen.

Many stories—both official and unfiltered, true and embellished—have been told about the World Ski and Snowboard Festival during its 20-year run. But getting to the beating heart of this over-the-top extravaganza required a retreat to the margins, tapping industry experience and poaching savvy to send out the season in a fitting tribute to the Festival’s original, lowbrow rock-star style. Sitting exhausted on the tailgate as the season fades to dirt, we realize we did this WSSF justice, leaving it all on the hill in the epicentre of the spring festival universe. And, as impressive as anything, we did so without once paying for parking.

A special thanks to Lauren Everest, PR Supervisor for Whistler/Blackcomb at the World Ski and Snowboard Festival, for the grassroots media access, as well as the many other folks who made this thing happen.

Even at a slightly advanced age, Dan K can still send it when the season or a story is on the line. Now semi-retired as a freelance writer for the major ski and snowboard pubs, he makes his living and earns a steady paycheck as the Senior Content Editor for Eddie Bauer. He still claims Baker as his favorite Washington hill and aims to get his beautiful daughter Flora on snow—but definitely not up to Whistler—as soon as she turns two.