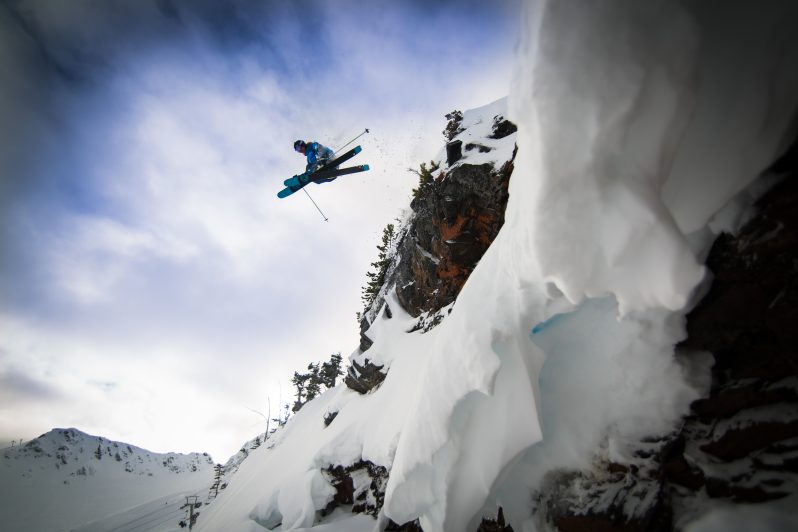 Last season, Dave and Tessa Treadway were sitting in the parking lot at Kicking Horse Resort, just outside of Golden, BC, waiting for the lifts to open. The idea started with a simple, off-the-cuff question, while their two-year-old son slept in the truck.

The couple were musing about their future, talking about how the winter hadn’t been that great, how Dave and been traveling a lot and away from the family, and how all this would play into their plans to have another child in the near future. They were looking at a few RVs parked nearby, and Tessa said, half-jokingly, “Well, we could just move out of our house in Pemberton, buy an RV and travel all winter.”

It was a question Dave wasn’t expecting. “I looked at her and asked if she was serious,” he says, “and she thought about it for a bit and said, ‘Yeah, let’s do it.’ So while Kasper [their son] kept napping we talked and planned it out a bit. That was in March, and in April we bought an RV, moved out of our place, and we’ve been in it now for 10 months full-time.”

In those 10 months Tessa’s casual idea has gone from a lifestyle switch-up to Dave’s official project, which he calls “Free Range Family.” The small family—along with their Labradoodle—have since traveled all across the Northwest in their mobile abode, from Revelstoke to Montana to Terrace and beyond, and their journey continues during what has been a stellar winter.

We caught up with Dave to ask him about his Free Range Family project, the perfect camper setup, gear design, Swedish auto-reply emails with his long-time sponsor Peak Performance, and life on the road with a 2-year-old.

First off, let’s start with the basics. What’s your setup?

A 1992 Dodge Cummins diesel, lifted with a sled deck and such, with a 21-foot Bigfoot tow-behind trailer.

We played around with a couple different ideas. We initially had a truck camper with a tow-behind sled trailer, which we really liked but we wanted to be as flexible as possible, which was difficult with that setup. If I went off sledding, I’d have to take the sled trailer, which meant I had to take the truck, which would mean the camper would be with me and Kasper and Tessa would have to hang out in the parking lot the whole time. My dad has a saying that “If momma ain’t happy, nobody happy,” and a whole day of hanging out in a snow-park parking lot isn’t exactly the definition of happiness.

Instead we decided to go with a tow behind, because then we could unhook and still have the sleds on the back of the truck and go sledding. We could leave the trailer wherever we wanted, then rally with the truck. It’s a work-in-progress sort of thing, but it works well.

The one big thing is water and freezing. To keep the lines from blowing up, we had to winterize the whole thing, which means we have no running water—just five-gallon water jugs that we use camping style. Another problem is privacy—you can’t really just step into your office for a meeting or a phone call or try and get everything done. Everyone is in one place.

Probably the biggest challenge, though, is that my wife is five months pregnant, and she has morning sickness. She essentially has to run outside into the snow and barf, and any smells of cooking or stuff can set her off. So it’s tricky. It’s not like in a house, where you can cook some food in the kitchen and then go into the living room and you get away from the smells. You cook in the trailer, and the whole trailer smells like food—which to most people is great. But to someone who pukes when they smell food, it’s not very great. That’s probably been the trickiest thing.

How’s living in a 21-foot trailer with a two-year-old?

Let me ask Kasper what he thinks.

“It’s the best!” [Kasper, in the background] [Dave laughs] It’s like being in a fort and camping all the time. Remember when you were a kid and would make a fort or set up your tent in the living room? That’s what it’s like, but every day. Plus he doesn’t know any different. We moved into the camper a few months after he turned a year old, so he can’t remember living in a home or house anyways.

Mainly, it means we’re just outside more. We’ve invested in good clothes for him: If it’s raining out, we throw him in rain gear and go play. He loves it. He’s got his little fort corner he likes to play in. Everything is about being simple. You don’t really have much space for anything, so we have a little washtub, like five liters—it used to be his bathtub but he outgrew it—so our rule is he only gets the amount of toys that can fit in the washtub. He got all these new toys for Christmas so we had to clean it out and get rid of some old ones. It’s all about simplicity.

And having a dog?

Right now she’s at Tessa’s parents’ place, where we left her after Christmas, but other than that we’ve had her the whole time and it was totally fine. She’s a Golden Labradoodle, really smart, and she figured out the spots where she was out of the way. Like if we were sitting at the table, she’d be by the door.

In the summer we could leave her outside all the time, but as the winter rolled around we’d go skiing and she’d have to stay in the trailer, and we felt bad that was cooped up all day. Now she has a lot more room to roam for the next few months of winter.

What have been the best parts?

One thing that’s both a highlight and a lowlight is that we’re just together all the time. As a family and as a relationship, when we have an argument and are mad at each other, we really can’t go into the other room and ignore it. You just have to deal with it.

A definite highlight is just the amount of time I get to spend with Kasper. We’re with him all the time, so it’s pretty cool how much I’ve been around. Everyone tells us that when you have a kid, you should enjoy it and take advantage of it as much as you can because the years just fly by. We’re really trying to take that advice to heart.

A more general benefit is that the time you’d normally spend taking care of a house we get to exchange for doing fun stuff. Today I did a pretty full house cleaning: Shook out the rugs, did the dishes, swept and took out the garbage, and I was done in about 15 minutes. With a normal-sized house, that would take a couple hours.

Would you recommend it for other folks?

Yeah, for sure. I think it’s one of those things where it’s hard to take the initial step, to say, “Alright, we’re doing this.” But I don’t think anyone would look back and regret it. Especially for the summer. Summer is super easy.

As far as winter, I’d recommend it…that is if you’re up for the challenge, because there are a lot more difficulties that come with winter. We’re super fortunate that even though we don’t make much money, thanks to our ski connections we stay for free and ski for free pretty much everywhere we go. If you’re paying for your own way it can add up, but at the same time you’ll also be saving $1,000 a month in rent that you can put towards that life. Our expenses right now are essentially our cell phone bill, our truck insurance, and food and fuel. That’s about it. We can’t really buy anything because it doesn’t fit.

As far as ski connections go, when did you start skiing for Peak Performance?

How much are you involved with product design?

Quite a bit, and more and more moving forward. Next year I’m working personally with the head designer of the Heli line—my usual gear choice—building a new line that essentially he and I are responsible for creating.

How is it working with a Swedish company?

It’s great, because they make rad gear and they love winter and are super passionate about skiing. Everybody in the company, whether you’re an athlete or work in the front desk in Stockholm, you can guarantee they’re passionate about skiing. They’re default auto reply when they’re on vacation is something to the effect of “At Peak Performance, we love to ski and travel the world, and I’m away on vacation right now and will get back to you when I can.”

The bad side of that is whenever you’re trying to get a hold of somebody, half the time they’re on vacation skiing.

They essentially fund our life. I give them a lot of gear feedback, and have along the years. Most companies I ski for, I’ll give them 20 pieces of feedback, and I’ll take it as a compliment if one thing changes. While I was working with Peak on their Heli and Vertical line, they pretty much listened to everything I said. I was super stoked on it.

Along the way, you’ve accessed skiing through quite a mix of methods—sledding, chairlifts, touring, helicopters. Is that something you set out to do?

I don’t think it’s intentional. We just like playing in the mountains however we end up doing it. Tessa was skiing with Kasper up on Whistler, and tomorrow we’re headed off to a backcountry hut for three days as a family, sledding in and ski touring from there. I’m really looking forward to that. We just enjoy the mountains, whatever it takes to get to the top.

One thing that’s been really interesting and something we’ve really enjoyed is the people along the way. As a pro skier, I find that I’m quite removed from actual ski culture; since I’ve been living in Pemberton, I go sled skiing with a couple local buddies and then go back to my house. I don’t really see other skiers besides the couple days a year when we go up on the hill. But now we’re camping and staying alongside other ski bums and other travelers. We don’t have to race back home after. We can hang out in the village or the ski town or whatever. It’s been awesome to dive back into ski culture, and rub shoulders with other skiers. That’s been something that’s been really cool and we’re looking forward to doing more of.

That means hitting the small local places, something we haven’t done enough of yet. Places like Shames, up in Terrace. It was so rad to see it dumping snow and all these skiers in the lift lines, a huge chunk of them with no goggles and just a ball cap on their head, with no jacket besides a cotton hoodie. That’s something we love and is really valuable, and we’d like to do more of.

How long are you going to keep the Free Range dream rolling?

Well, the skiing and adventuring part we’re going to keep doing forever. The trailer thing—we said our goal was to do it for one year, and that’s going to be no problem. However, with the new baby on the way, it might be a little tricky to have a fresh baby with us and we’re looking forward to having our own home and property at some point. But we haven’t figured out where that’s going to be quite yet, so I think we’re just going to keep roaming until we find what works best for us.