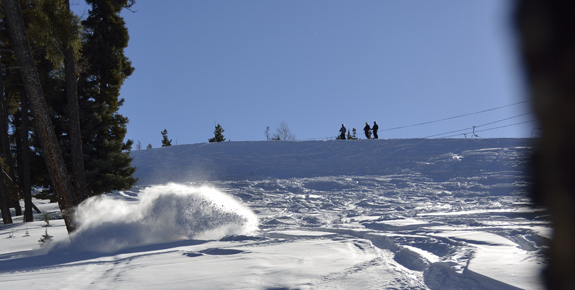 I know that geographically I’m in New Mexico, but this week tastes a lot like New Orleans. I’ve come to check out Red River Ski Area and the surrounding town is in the midst of celebrating its annual Mardi Gras in the Mountains festival. To emulate a classic Louisiana fashion, the whole town is practically swimming in gumbo, jambalaya, and a sundry sea of scrumptious crustaceans.

It’s the second day of my four-day trip to Red River. I’m at lunch, and there’s a pointy red face on my plate looking up at me—the face of a crawfish. For anyone who hasn’t seen one, crawfish are funny, cocky little creatures, especially in regards to their size. Scientists have discovered that the immensity of their claws is not a definite indication of their strength, meaning that in the world of these particular crustaceans, bigger doesn’t always mean better…or tastier.

Similar to the pithy punch of this bitty crawfish, the day leading up to this meal has proven the old adage can apply to ski hills as well as crustaceans. As skiers, we often look towards the biggest peaks and most popular resorts, steepest faces and highly acclaimed terrain, but there’s something to be said for going a bit under the radar.

My only previous experience in New Mexico was a scorching trip to Albuquerque nearly a decade ago, not the type to inspire dreams of soft pow or snow-covered slopes. But, even though it’s only a three-and-a-half hour drive from the blazing metropolitan city, it’s a long way from blacktop and traffic jams. Situated in the Southern Rocky Mountains, Red River Ski Area’s base starts at around 8,700 feet above sea level, and the peak reaches over 10,000 feet. High elevations and low temps keep the snow soft and playful. And with over 300 days of sunshine a year, bluebird ski days present themselves in a welcoming abundance.

I arrived at Red River Ski Area five days after the most recent snowstorm, and to my astonishment there were still plenty of unstirred stashes of snow accessible directly from the chairlift. With a vast majority of the mountain’s visitors being weekender families, those willing and able to send it through the trees between trails can score untouched powder for days following a storm (according to some locals, even weeks). Any doubts regarding the quality of southwestern ski potential created from my previous visit have since been banished.

To kick off the third day of my endeavor I head straight to the top of the resort. The consecutive Mardi Gras induced hangovers are starting to take their toll. Alcohol’s aftereffects coupled with the mountain’s high elevation makes catching my breath a slightly greater challenge than usual – C’est la vie de skie, eh? The early morning’s frigid air had encouraged me to layer up heavy, but now nearly noon, the sun has me sweating. Knowing I’m headed for the trees again, I better open up the vents. With no lift lines and scoring powder every run, my legs are burning out quicker than expected. But with conditions like these, I’m planning on skiing ‘til last chair.

My favorite zone of the mountain beckons me: a grove of breathtaking quaking aspens. The tree trunks are pleasantly dispersed—tight enough to provide a challenge but with ample space to comfortably rip through with speed. Similar to the rest of the mountain, intense terrain isn’t often staring you directly in the face, but if you’re able to find the unique hits and creative lines there is potential for some serious sending at Red River Ski Area. Along trails and in the trees cruisy side hits are as plentiful as they are playful.

Matching my amazement on the freeski potential Red River Ski Area has to offer, the park is on point, too. Situated directly under the mountain’s Platinum Chair, the Hollywood Terrain Park is aptly named: Skiing beneath lift-riding onlookers, you better be ready to put on a show when cruising through these hits. The top section flows like a slopestyle course: A box or rail hit followed by a three-jump line (each table constructed with adjacent hits of slightly varied size, allowing for average Joe’s like me to hit the smaller side of the two contiguous jump lines). From there the park spreads out like a skate park with a myriad of box, rail and wallride features.

Despite—or maybe because of—the feeling I was greasin’ like Wallisch, I catch an edge on the last rail in the park and manage to bang up my leg pretty good, a small fall resulting in a big pain. It’s a theme that has become rather relentless at this point. The crawfish, this fall, the resort and the town of Red River all keep screaming at me: Don’t underestimate something based on its size.

In light of the injury, it’s time to go find a drink that shares this same zealous notion. I usually wait until after 5 p.m. to indulge in spirituous pursuits – but, it is Mardi Gras after all, right? It’s past 5 p.m. somewhere. Boisterous groups of bead-clad partiers lining the street’s sun-kissed sidewalks assure me that this justification is valid.

Red River’s humble size implies a quaint ambience, but what it lacks in area it makes up for in unbridled energy and a surplus of smiles. The town originally boomed in the late 1800s as a worthwhile location for miners hunting gold and trappers seeking game. The last earnest attempts at mining extended through the early 1930s, but for the last 85 or so years Red River’s main draw has been tourism, an oasis for mountainous exploration and relaxation.

Aside from resort skiing, Red River offers opportunities to rip around on snowmobiles, rambunctiously snow tube down the ski area’s bunny slope, or, for folks who like a slower pace, snowshoe or cross-country ski one of the dozens of trails at the Enchanted Forest XC Ski and Snowshoe Area. In the spring and summer months Red River becomes a favorable fly-fishing destination with an abundance of rainbow and brown trout inhabiting the area. A majority of Red River’s businesses—a pleasant medley of restaurants, adventure tour companies and bars (or rather, “saloons”)—operate on Main Street, a mile-long strip located directly adjacent to the base of the chairlifts. I pop off my skis and clamber a half mile down the road to the Motherlode Saloon still in my gear. No one bats an eye. Après-ski style is the norm here. Well, that and cowboy boots.

I find my spot at the bar and am promptly greeted by a friendly bartender that’s ready to take my order. She saw the limp I carried in towards my stool and asks me what happened. I briefly describe the fall and request her advice in choosing a drink that would do well in combating the pain.

“I’ve got just the thing,” she says with a smile. She leaves and comes back with a short glass containing a dark, foul smelling concoction of liquors, one that smells like a serious day-ender. A quick whiff of the mystery drink makes me grimace in revulsion. She giggles.

“What is this?” I ask her. I’m more than just a bit skeptical, as I still would like to wake up and ski tomorrow.

“Don’t worry about it,” she says. “Just try it. But if I were you, I’d drink it down quick. It’s small, but strong. Really packs a serious punch.”

I look at her and smirk. Why am I not surprised?

A big thank you to Linton Judycki, Denny & Maggie Judycki, Walt Foley, Sarah Dorrance, Dave Stevenson, Karen Kelly and the terrain park staff from Red River Ski Area, Dan & Sherri Foley from the Auslander Condominums, George Brooks from Ski New Mexico, Tori Cuddy & Kinley Tutten from Geiger & Associates PR, and anyone else I shared a lap, laugh or drink with during this trip of a lifetime.