The arrival of COVID-19 this spring effectively kiboshed the final third of the Northern Hemisphere’s ski season in 2020, a period usually characterized by stable snowpack and ambitious projects in the mountains. Trips were cancelled, expeditions evaporated overnight, and dreams were put on hold indefinitely.

But the global pause also yielded the rare moment of opportunity. Michael “Bird” Shaffer, a professional skier from Washington (that rarely self-identifies as such), was headed toward Chamonix, France, the steep skiing capital of Europe, when the world pressed pause. Forced to stay put in the Cascades, Bird suddenly saw a window to ski a line he’d imagined since his schoolboy days in Twisp, WA—a line that had eluded him for the better part of a decade.

Hanging in between the spires of Liberty Bell Mountain, one of the premier climbing locales in North America, Bird’s dream line traced a jagged zag between serious exposure along the peak’s northeast face, requiring near-perfect snow on multiple aspects and a harrowing cornice drop into a hanging snowfield. This spring, the conditions aligned, and worldwide shutdown provided the final piece to Bird’s convoluted puzzle.

The result is “(In)spire,” a three-minute edit of visceral and consequential skiing in one of the Cascades’ most picturesque zones. It’s by no means a polished Warren Miller product (though Bird did grace Warren’s silver screen in 2018), but that’s kind of the point. This is steep skiing the way it’s meant to be, the kind of video that makes your heart rate go up in your office chair.

We caught up with the man behind the line to hear a bit more about the project, and how it all came together during the most unlikely of times.

The Ski Journal: How did this idea get dreamed up?
Bird: I looked at that line my whole life; I knew that I could ski it. After a few attempts climbing the route and not being able to top out, I’d tried skiing it in less-than-mediocre conditions. In quarantine last spring, I spent nearly every day looking at the thing when I skied in the area and waited for the conditions to be in.

One evening after skiing, I saw it from a unique angle and I saw a way in from the back side. I realized I could drop in to the hanging north face, accessing the front north east face and the top of the line.

Why was this line unique?
Aesthetically it’s one of the most beautiful forms to ski I have ever seen. It is nestled in between these spires––hence the name “(In)spire.” Like a shiny jeweled mystery glowing in the morning sun, these spires have evoked the freedom of the mountains to so many––most of whom don’t even ski. Add to that the airy turns in powder with exposure above. Plus, with all the aspect changes from the dark true north, where it never sees sun, to the northeast wrapping to northwest and then back around to a northeast couloir to finish it off, it is hard for me to imagine a more creative ski line.

How did you pull it off?
I was skiing nearly every day up in the zone and watching the mountains. I tried to ride similar aspects on steeper slopes to know when it was setting up just right.

Was there anything you couldn’t calculate for? Did it all go smooth?
The drop-in was a little dicey. I considered a rappel, but being solo my rope would have been cutting into the cornice and eventually snagged (been there before). With some snow ball throwing, I felt strongly that I could drop in. This risk made the ski line pure—without the need of rope.

My drop-in felt balanced, but it was steeper and a lot deeper than I imagined. My plan was to smear into the face and ride it out in a traverse but there was a spine buried. The spine sent my downhill ski tip up towards my head almost sending me backwards––it was a slow-motion ride for sure until I came to rest. 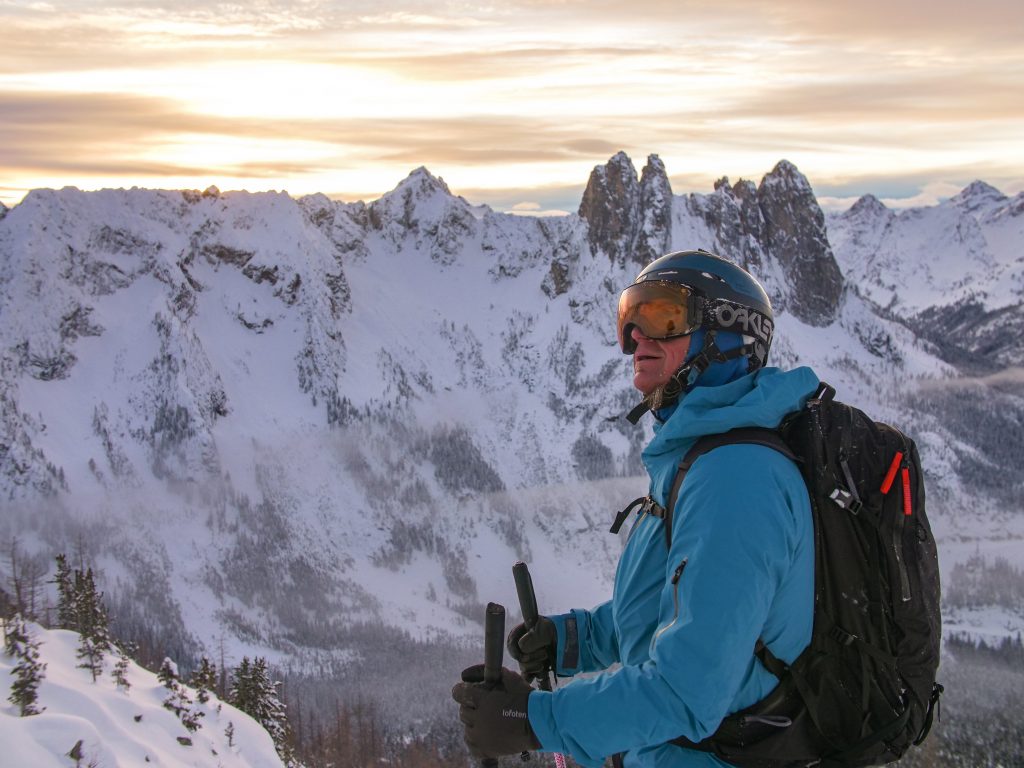 ABOVE Shaffer has risen to fame in steep skiing circles for his descents in Chamonix and, more recently, his speedflying for productions like Warren Miller.

You’ve skied some of the steepest lines around Chamonix and Rainier, why was this one special to you?
It’s in my front yard and I’ve looked at it all my life. I actually tried to ski it a few times previously. Once I even got on the upper front face and made turns in horrible crust. I always knew I would find the time to ski it in pow, but dropping in from the top remained a mystery until this spring.

How did your history of ski mountaineering in a place like Cham prepare you for something like this?
Cham gives you new perspective. With a lot of time in steep places, angles bend and change, daunting exposure seems more normal and with that headspace lines appear before your eyes where they never existed before.

For you, what’s the value of keeping it close to home?
The more time I spend where I’m from, the more the beauty and connection grows. I’m a part of this land and it’s here that I hear myself and what calls me. I feel very fortunate to have that connection.

You tend to run a light operation in the mountains when it comes to filming, but this time seemed a little different. What did you change?
Well, I’m often a one bird show skiing solo. I like to tell a story, but don’t want to be so encumbered by getting a production team up in the zone. The less I need in the mountains to capture the story, the better. I can still hear what the mountains say, without a lot of extra squawk and with just a few buttons to push I can get to skiing the pow that is waiting.

On this day, I was fortunate to have Alex my nephew flying [a drone]. Making videos solo adds intense pressure and detracts from the experience if, as the skier, you also have to fly that little, angry one-eyed buzzard.

What’s next? Staying in Washington?
There’s a lot of special runs out there and many I’m drawn to ski again right here in my “garden.”

I have a feeling it’s going to be a huge winter here in the PNW and I would love to ski pow right off the porch for a few months. When the time is right, I’ll get up high to paint a few turns on special mountains around here. Or, who knows, maybe I jump on the plane to France and stick the [Agui du] Midi needle into my veins again.